Write America: A Reading for Our Country 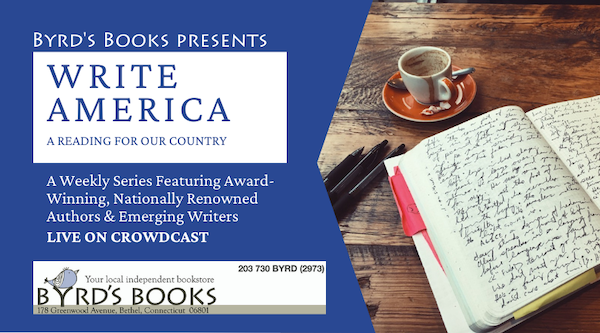 Byrd's Books is proud to be the new home of Write America!

The series launched October 2021. View the full schedule of conversations below. Registration will be open very soon for all events, many events are added daily, and the calendar is likely to adjust a bit. Stay tuned.

Whenever possible, signed copies of the writers' books will be available to purchase.

Write America is an organization of writers concerned about the divisions  in our country that  have evidenced themselves and deepened over the past few years. We see a torn America these days, jeopardizing basic principles of justice, freedom, fair play, and equality.

These principles are important to writers, felt passionately if shown indirectly. They undergird our poems, novels, essays, memoirs, every form by which we attempt to reach out to our human family through grace and precision of language and the quiet power of art. A writer’s words are a tacit call for people to gather round and discover or rediscover their common thoughts and feelings and their connections to one another. Whatever its subject, writing is at heart a moral force, what Stanley Kunitz called “the testing of existence at its highest pitch.” Writing makes justice desirable, evil intelligible, grief endurable, and love possible.

In this project, then, we have  come together to read our work in the interests of life's nobler values. Normally, in the course of our profession, we keep our distance. We create, publish, and say with Chaucer, 'go little book,'  to a remote receiving world. With our readings for Write America we will try to bridge  that distance in a gesture of bonding. The nation is injured. We hope to contribute to its healing.

Upcoming Dates- all on Mondays at 7pm (except where noted): links provided for registration

BREAK for the holidays

RECORDINGS FROM PAST EVENTS:

The Story I Am: Mad about the Writing Life (Paperback)