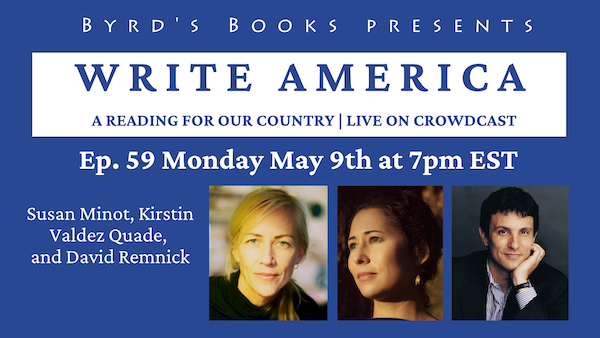 Join us for the fifty-ninth episode of Write America on Monday May 9th featuring Susan Minot, Kirstin Valdez Quade, and David Remnick as they read and discuss their works- intimating how the deep divisions in the country may be healed by the quiet power of art.

SUSAN MINOT is an award-winning novelist, short-story writer, poet, playwright and screenwriter. Her first novel, Monkeys, was published in a dozen countries and won the Prix Femina Étranger in France. Her novel Evening was a worldwide best seller and became a major motion picture. She teaches at Stony Brook University and lives in New York City and on an island off the coast of Maine.

KIRSTEN VALDEZ QUADE is the author of Night at the Fiestas, which won the John Leonard Prize from the National Book Critics Circle, the Sue Kaufman Prize from the American Academy of Arts and Letters, and a “5 Under 35” award from the National Book Foundation. Kirstin was awarded a Rome Prize, a Rona Jaffe Foundation Writer’s Award, and a Stegner Fellowship. Her work has appeared in The New York Times, The New Yorker, The Best American Short Stories, The O. Henry Prize Stories, and elsewhere. She is an Assistant Professor at Princeton. Her new novel The Five Wounds is forthcoming April 2021 from Norton.

DAVID REMNICK was a reporter for The Washington Post for ten years, including four in Moscow. He joined The New Yorker as a writer in 1992 and has been the magazine’s editor since 1998. His previous book, King of the World, a biography of Muhammad Ali, was selected by Time as the top nonfiction book of the year. Lenin’s Tomb: The Last Days of the Soviet Empire won a Pulitzer Prize.

Why I Don't Write: And Other Stories (Vintage Contemporaries) (Paperback)

The Five Wounds: A Novel (Paperback)

The Fragile Earth: Writing from the New Yorker on Climate Change (Paperback)