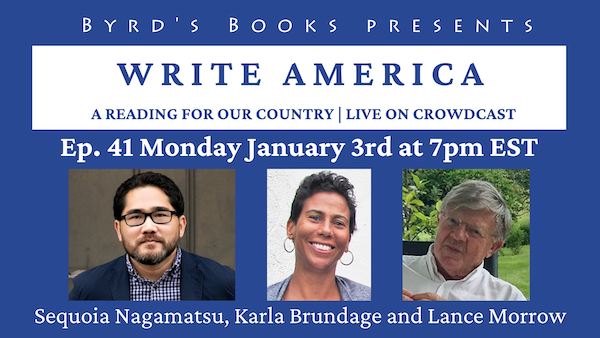 Join us for the forty-first episode of Write America featuring Sequoia Nagamatsu, Karla Brundage and Lance Morrow as they read and discuss their works intimating how the deep divisions in the country may be healed by the quiet power of art.

SEQUOIA NAGAMATSU is the author of the forthcoming novels, HOW HIGH WE GO IN THE DARK (2022) and GIRL ZERO (William Morrow/Harper Collins and Bloomsbury UK) and the story collection, WHERE WE GO WHEN ALL WE WERE IS GONE (Black Lawrence Press), silver medal winner of the 2016 Foreword Reviews Indies Book of the Year Award, an Entropy Magazine Best Book of 2016, and a notable book at Buzzfeed. His work has appeared or is forthcoming in publications such as Conjunctions, The Southern Review, ZYZZYVA, Tin House, Iowa Review, Lightspeed Magazine, and One World: A Global Anthology of Short Stories, and has been listed as notable in Best American Non-Required Reading and the Best Horror of the Year. He teaches creative writing at Saint Olaf College and the Rainier Writing Workshop Low-Residency MFA program and lives in Minneapolis with his wife, the writer Cole Nagamatsu, their cat Kalahira, their real dog Fenris, and a robot dog named Calvino. Review in Shelf Awareness (12/14/21).

KARLA BRUNDAGE is a Bay Area based poet, activist, and educator with a passion for social justice. Born in Berkeley, California, Karla spent most of her childhood in Hawaii where she developed a deep love of nature. She is the founder of West Oakland to West Africa Poetry Exchange (WO2WA), which has facilitated cross-cultural exchange between Oakland and West African poets. Karla is a board member of the Before Columbus Foundation, which provides recognition and a wider audience for the wealth of cultural and ethnic diversity that constitutes American writing. Her editorial experience includes a pan-Africanist WO2WA poetry collection, Our Spirits Carry Our Voices, published by Pacific Raven Press in 2020; Oakland Out Loud (2007); and Words Upon the Waters (2006) both by Jukebox Press. Her poetry book, Swallowing Watermelons, was published by Ishmael Reed Publishing Company in 2006. Her poetry, short stories and essays have been widely anthologized and can be found in Hip Mama, Literary Kitchen, Lotus Press, Bamboo Ridge Press, Vibe and Konch Literary Magazine. She holds an MA in Education from San Francisco State University and an MFA from Mills College. Mer lates book, Mulatta- Not So Tragic is available from the publisher HERE.

LANCE MORROW is an author and journalist whose essays appeared for many years in Time Magazine, where he wrote over 150 cover stories, eight Man of the Year profiles, and hundreds of essays covering wars from Vietnam to the Middle East and Bosnia, the American presidency from Nixon to Obama, and the radical changes in American life in the second half of the 20th century into the 21st. He is the author of eight books, including a widely acclaimed memoir, The Chief.  Selections of his essays have been published in Fishing in the Tiber, and in Second Drafts of History. He is a winner of the National Magazine Award in essay and criticism. Morrow is currently the Henry Grunwald Senior Fellow at the Ethics and Public Policy Center in Washington.

How High We Go in the Dark: A Novel (Hardcover)