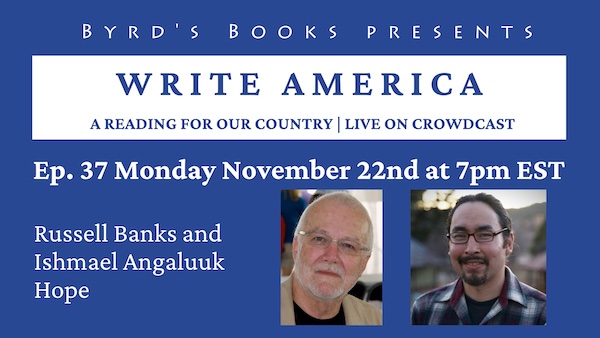 Join us for the thirty-seventh episode of Write America featuring Russell Banks and Ishmael Angaluuk Hope as they read and discuss their works intimating how the deep divisions in the country may be healed by the quiet power of art.

Russell Banks, twice a finalist for the Pulitzer Prize, is one of America's most prestigious fiction writers, a past president of the International Parliament of Writers, and a member of the American Academy of Arts and Letters. His work has been translated into twenty languages and has received numerous prizes and awards, including the Common Wealth Award for Literature. He lives in upstate New York and Miami, Florida.

Ishmael Angaluuk Hope (Tlingit, Iñupiaq)  is an Alaska Native poety and writer of genres such as video games and and film. He is also a scholar of Native American oral literature and art. He is a learner and speaker of the Tlingit language. He belongs to the Tlingit and Inupiaq tribes. He takes pride in all aspects of his heritage as well, such as his German and Welsh ancestry. The family remembered his great-great grandfather, Percy Hope, as an "English" gold prospector, but with a little research into names he found that Percy was likely to have been Welsh.

Ishmael publsihed two books of poetry with Ishmael Reed Publishing Company, Courtesans of Flounder Hill (2014), and Rock Piles Along the Eddy (2017). Upcoming projects include a collection of Tlingit stories by storyteller Robert Zuboff, Shaadaax', and a modern speculative fiction epic written in Tlingit, with a facing English translation.
Event date:
Monday, November 22, 2021 - 7:00pm to 8:00pm
Event address:
This event is on Crowdcast