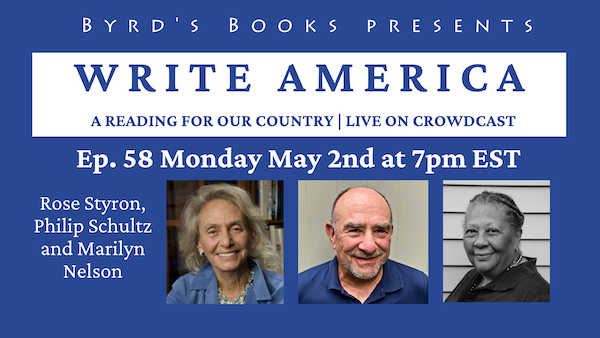 Join us for the fifty- eighth episode of Write America on Monday May 2nd featuring Rose Styron, Philip Schultz and Marilyn Nelson as they read and discuss their works- intimating how the deep divisions in the country may be healed by the quiet power of art.

Council, PEN’s Freedom to Write Committee and the RFK Human Rights Award. She is currently on the advisory board of Johns Hopkins Hospital and Human Rights. A variety of her articles appeared in national periodicals on her involvement. In 2009 and 2010 Rose was a resident fellow at Harvard’s Institute of Politics and its Carr Center for Human Rights. She has written introductions to Letters to My Father (LSU Press) and The Selected Letters of William Styron (Random House), also editing the latter. An introduction to Dinner in Camelot and an essay on Gabriel Garcia Marquez have appeared in The Review this year. Most recently, with Meryl Streep, she co-chairs Poetry and the Creative Mind on stage at Lincoln Center on behalf of the Academy of American Poets each April. She serves on the Advisory Boards of Beyond Conflict and the Johns Hopkins Hospital—Health and Human Rights boards. Rose’s newest volume of poems Fierce Day was published in 2015. She is currently working on a memoir.

PHILIP SCHULTZ is the author of several collections of poetry, including Failure, winner of the 2008 Pulitzer Prize. His other collections include Luxury, The Wherewithal: A Novel in Verse, The God of Loneliness: New and Selected Poems, Living in the Past, The Holy Worm of Praise, and Deep Within the Ravine. He has also published a memoir, My Dyslexia, in which he recounts his difficulties with the debilitating language disability and his struggles to overcome it. His work has been published in The New Yorker, Partisan Review, The New Republic, The Paris Review, Slate, and other magazines. A new memoir, Comforts of the Abyss, that describes his school of creative writing, The Writers Studio, and its writing method, will be published on June 7, 2022. He is the recipient of a Fullbright Fellowship, a Guggenheim Fellowship, and a National Endowment for the Arts Fellowship in Poetry.

MARILYN NELSON is the author or translator of seventeen poetry books and the memoir How I Discovered Poetry. She is also the author of The Fields Of Praise: New And Selected Poems, which won the 1998 Poets’ Prize, Carver: A Life In Poems, which won the 2001 Boston Globe/Hornbook Award and the Flora Stieglitz Straus Award, and Fortune’s Bones, which was a Coretta Scott King Honor Book and won the Lion and the Unicorn Award for Excellence in North American Poetry. Nelson’s honors include two NEA creative writing fellowships, the 1990 Connecticut Arts Award, a Fulbright Teaching Fellowship, a fellowship from the J.S. Guggenheim Memorial Foundation, and the Frost Medal. She was the Poet Laureate of the State of Connecticut from 2001-2006 and has released two books already in 2022, Augusta Savage: The Shape of a Sculptor's Life and a children's book A is for Oboe: The Orchestra's Alphabet.

Comforts of the Abyss: The Art of Persona Writing (Hardcover)

Augusta Savage: The Shape of a Sculptor's Life (Hardcover)

A is for Oboe: The Orchestra's Alphabet (Hardcover)