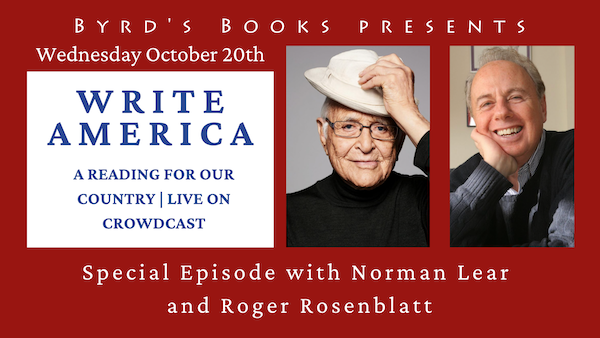 Join us for a very special evening on Wednesday October 20th with two extremely talented gentlemen. Roger Rosenblatt will host Norman Lear for what is expected to be a priceless evening of conversation about Mr. Lear's varied and stellar career.

This event is free to attend, registration required. Your purchase of a book helps support this program - see below for book details.

NORMAN LEAR is the television producer of such groundbreaking sitcoms as All in the Family, Sanford and Son, One Day at a Time, The Jeffersons, Good Times, and Maude. He has received four Emmy awards, a Peabody, and the National Medal of Arts. As an activist, he founded People For the American Way. He lives in Los Angeles. Most recently, Mr. Lear is the subject of the PBS American Masters episode, Norman Lear: Just Another Version of You, which premiered 10/25/16.

Born in 1922 in New Haven, Connecticut, Lear attended Emerson College before flying 52 combat missions over Europe during World War II.  Upon his return, Lear began a successful career writing and producing programs like The Colgate Comedy Hour, and The Martha Raye Show - ultimately leading to Lear captivating 120 million viewers per week with his iconic shows of the 1970s and ‘80s.

Lear’s social and political activism extend beyond the messaging of his programs and he continues to be a strong advocate for civic duty, and progressive American values.

As Lear began witnessing the rise of the radical religious right, he put his television career on hold in 1980 to found People For The American Way.  Today, the organization is over one million members and activists strong and continues to fight right-wing extremism while defending constitutional values like free expression, religious liberty, equal justice under the law, and the right to meaningfully participate in our democracy.

In 2000, the Norman Lear Center was dedicated at the USC Annenberg School for Communication.

In 2001, Lyn and Norman Lear purchased one of the few surviving original copies of the Declaration of Independence.  During the decade that they owned it, they shared it with the American people by touring it to all 50 states.  As part of the Declaration of Independence Road Trip, Lear launched Declare Yourself, a nonpartisan youth voter initiative that registered over four million new young voters in the 2004, 2006, and 2008 elections.

ROGER ROSENBLATT whose work has been published in 14 languages, is the author of five New York Times  Notable Books of the Year, and three Times  bestsellers, including the memoirs Kayak  Morning, The Boy Detective and Making Toast, originally an essay in the New Yorker. The Story I Am, a collection on writing and the writing life was published in April of 2020 and Cold Moon: On Life, Love, and Responsibility was published in October.  He has also written seven off-Broadway plays, notably the one-person Free Speech in America , that he performed at the American Place Theater, named one of the Times’s  “Ten Best Plays of 1991.” In 2019, The Bay Street Theater in Sag Harbor produced "Lives in the Basement, Does Nothing," his one-person musical play about the writing life, for which he played jazz piano.

The Distinguished Professor of English and Writing at Stony Brook, he formerly held the Briggs-Copeland appointment in creative writing at Harvard, where he earned his Ph.D. In 1985, he was on the short list for NASA’s Journalist in Space, before the Challenger shuttle tragedy ended the program. Among his honors are two George Polk Awards; the Peabody, and the Emmy, for his essays at Time magazine and on PBS; a Fulbright  to Ireland, where he played on the Irish International Basketball Team; seven honorary doctorates; the Kenyon Review Award for Lifetime Literary Achievement; and the President’s Medal from the Chautauqua Institution for his body of work.

All in the Family: The Show that Changed Television (Hardcover)

Even This I Get to Experience (Paperback)