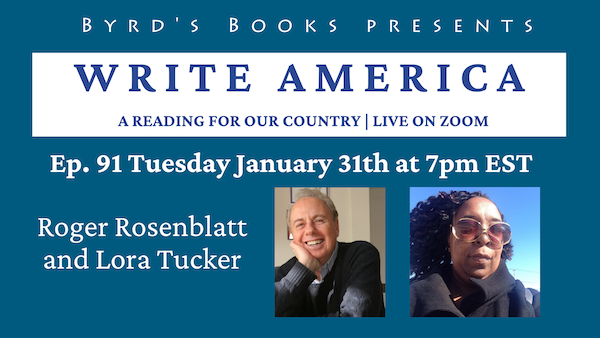 Join us for the ninety- first, and final, episode of Write America on Monday, January 31st featuring Roger Rosenblatt and Lora Tucker as they read and discuss their works- intimating how the deep divisions in the country may be healed by the quiet power of art.

LORA RENE’ TUCKER, LMSW, is Brooklyn born and educated; now living in Sag Harbor, NY. Lora has over 30 years advocating for racial and social justice throughout the New York area, teaching cultural competence and diversity.  As the “Therapeutic Poet,” she had her poetry featured in NYC venues since 1992 and self-published her first book of poetry, Writes of Passage, in 2010. She’s involved with the Sister’s Righting Salon, Women Writers in Bloom Poetry Salon and is an “alumni” of the Louis Reyes Rivera Writing Workshop.

She has volunteered for the John Jermaine Memorial Library facilitating film discussions on racial justice and inclusion for their “Tough Topics” Film Club. She is now conducting poetry therapy workshops for Stonybrook/ Southampton Hospital’s Wellness Program, working with people with life threatening illnesses.  She has been featured and published in The East Hampton Star, the NY State Preservation League’s blog and blogs in POZ online magazine for people living with HIV.   https://www.poz.com/blogger/lora-rene-tucker.  She is presently the poetry editor of African Voices literary magazine and an intern for the Southampton African American Museum, initiating their “Everyday People’s Corner,” which documents the history of the Indigenous, Black, and people of color in the Hamptons. On Friday, March 3, 2023, Lora will host “Drop the Mic,” with the Unitarian Universalist Church of the South Fork. The inaugural monthly event will be an open mic for all that use a pen or an instrument. All are welcomed.

Working on her MFA in Creative Writing at Stonybrook University at the (tender) age of 62; she received for two semesters the Sarah Martell Award for mid career, returning women students. (Which is for mature women who love learning!) She was Mr. Rosenblatt’s assistant for her first class at Stonybrook’s Summer Writing Conference. Lora’s motivation is to write about her father’s contributions as a Tuskegee Airman, her search for his-story…and more.

Her “nine to fives” were being a corporate interior designer for the Federal Reserve Bank of NY, a credentialed alcohol and drug counselor, and a licensed social worker and psychotherapist. She’s now a writer until further notice.

Roger Rosenblatt is the author of five New York Times Notable Books, and three Times bestsellers, including the memoirs Kayak Morning and Making Toast. He’s written seven off-Broadway plays, including “Free Speech in America”, named one of the Times’ 10 best plays of 1991, and “Lives in the Basement, Does Nothing”,  his one-person play about the writing life, for which he played jazz piano. The Distinguished Professor of English and Writing emeritus at Stony Brook University, he formerly held the Briggs-Copeland appointment in the teaching of writing at Harvard. Among his honors are two George Polk Awards, the Peabody and the Emmy for his essays at Time magazine and on PBS; a Fulbright to Irelabd, where he played on he Irish International Basketball Team; seven honorary doctorates; and the Kenyon Review Award for Lifetime Literary Achievement.