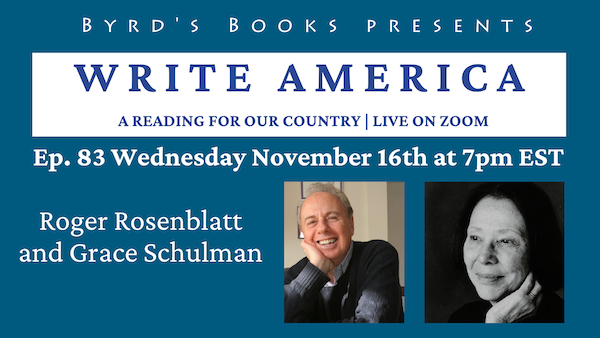 Join us for this very special eighty-third episode of Write America on Monday September 19th featuring Roger Rosenblatt and Grace Schulman as they read and discuss their works- intimating how the deep divisions in the country may be healed by the quiet power of art.
This event is free to attend- please use special zoom link below.
Your purchase of a book helps support this program - see below for book details.
About the authors:

Roger Rosenblatt is the author of five New York Times Notable Books, and three Times bestsellers, including the memoirs Kayak Morning and Making Toast. He’s written seven off-Broadway plays, including “Free Speech in America”, named one of the Times’ 10 best plays of 1991, and “Lives in the Basement, Does Nothing”,  his one-person play about the writing life, for which he played jazz piano.Recently retired as Distinguished Professor of English and Writing at Stony Brook University, he formerly held the Briggs-Copeland appointment in the teaching of writing at Harvard. Among his honors are two George Polk Awards, the Peabody and the Emmy for his essays at Time magazine and on PBS; a Fulbright to Irelabd, where he played on he Irish International Basketball Team; seven honorary doctorates; and the Kenyon Review Award for Lifetime Literary Achievement.

Grace Schulman, winner of the Frost Medal for Distinguished Lifetime Achievement in American Poetry, is a member of the American Academy of Arts and Letters. She is the author of eight collections of poems and of a memoir, Strange Paradise: Portrait of a Marriage. Formerly Poetry Editor of the Nation and Director of the Poetry Center, 92nd Street Y, she is Distinguished Professor of CUNY's Baruch College. Her newest poetry collection, The Marble Bed, was released in October 2020.

This is a special link JUST FOR THIS EPISODE: