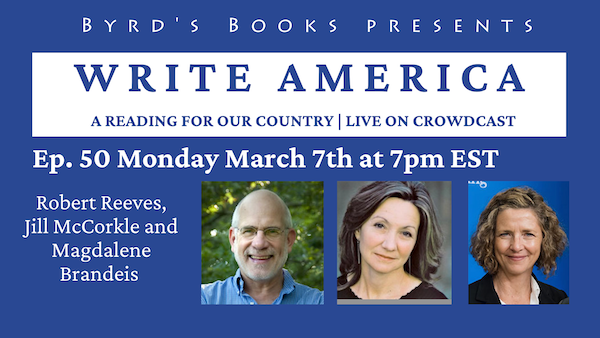 Join us for the fiftieth episode of Write America featuring Robert Reeves, Jill McCorkle and Magdalene Brandeis as they read and discuss their works- intimating how the deep divisions in the country may be healed by the quiet power of art.

After joining the English Department Faculty in 2006, Reeves founded the Stony Brook Southampton MFA in Creative Writing and Literature and presided over the program’s dramatic growth.  He recruited the nation’s premier creative writing faculty, expanded the prestigious Summer Writers Conference across a range of creative disciplines, and established the award-winning national literary and arts journal, TSR: The Southampton Review.  He has also extended the program’s reach to a flourishing graduate presence at Stony Brook Manhattan, to international locations, including Florence and Stony Brook’s Turkana Basin Institute, Kenya, and to arts educations programs important to the community, such as the Young American Writers Project (YAWP).  In 2012, the Southampton campus will launch an honors program for undergraduates in creative arts, Semesters by the Sea.

Reeves is the author of two critically acclaimed novels, as well as screenplays, short fiction, essays, and literary criticism.  He had taught at Harvard and Princeton, and holds a B.A. and M.A. from Harvard University. He is married to Beth Reeves and has a college-age son, Evan.

JILL MCCORKLE’s first two novels were released simultaneously when she was just out of college, and the New York Times called her "a born novelist." Since then, she has published six novels and four collections of short stories, and her work has appeared in Best American Short Stories several times, as well as The Norton Anthology of Short Fiction. Five of her books have been New York Times Notable books, and her most recent novel, Life After Life, was a New York Times bestseller. She has received the New England Booksellers Award, the John Dos Passos Prize for Excellence in Literature, and the North Carolina Award for Literature. She has written for the New York Times Book Review, the Washington Post, the Boston Globe, Garden and Gun, the Atlantic, and other publications. She was a Briggs-Copeland Lecturer in Fiction at Harvard, where she also chaired the department of creative writing. She is currently a faculty member of the Bennington College Writing Seminars and is affiliated with the MFA program at North Carolina State University.

MAGDALENE BRANDEIS is a Producer, Novelist, and the Executive Director of the MFA Programs in Film and Television Writing at Stony Brook University. Getting her start in development at Hollywood Pictures and Caravan Pictures, she went on to translate and adapt French films and produce television series and pilots for ABC, AMC, Bravo, and MTV. She also served as the Executive Director of The Bridge Program, a non-profit, and as a juror for The March on Washington Film Festival during the Obama Administration. She holds a BA from Antioch University Los Angeles, and an MFA in Writing and Literature from Stony Brook. Her short stories have been published in The East Hampton Star, and The Southampton Review .