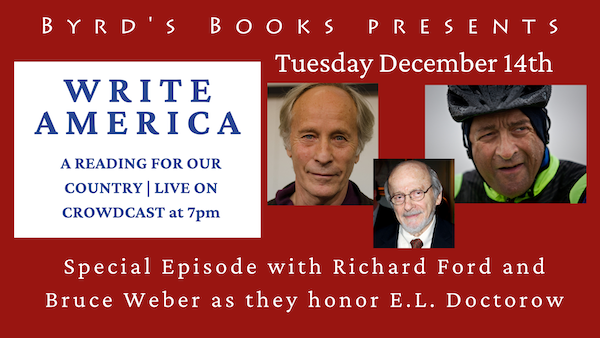 Richard Ford is the author of The Sportswriter and Independence Day. He is winner of the Prix Femina in France, the 2019 Library of Congress Prize for American Fiction, and the Princess of Asturias Award in Spain. He is also the author of the New York Times bestseller Canada. His story collections include the bestseller Let Me Be Frank with You, Rock Springs, and A Multitude of Sins. He lives in Boothbay, Maine, with his wife, Kristina Ford.

Bruce Weber, a reporter for The New York Times, began his career in publishing as a fiction editor at Esquire. He has written for numerous publications and is the author of the New York Times bestseller As They See 'Em: A Fan's Travels in the Land of Umpires, coauthor (with Savion Glover) of Savion! My Life in Tap, and the editor of Look Who's Talking: An Anthology of Voices in the Modern American Short Story.

E. L. Doctorow's works of fiction include Welcome to Hard Times, The Book of Daniel, Ragtime, Loon Lake, World's Fair, Billy Bathgate, The Waterworks, City of God, The March, Homer & Langley, and Andrew's Brain. Among his honors are the National Book Award, three National Book Critics Circle awards, two PEN/Faulkner awards, and the presidentially conferred National Humanities Medal. In 2009 he was shortlisted for the Man Booker International Prize, honoring a writer's lifetime achievement in fiction, and in 2012 he won the PEN/ Saul Bellow Award for Achievement in American Fiction, given to an author whose "scale of achievement over a sustained career places him in the highest rank of American literature." In 2013 the American Academy of Arts and Letters awarded him the Gold Medal for Fiction. In 2014 he was honored with the Library of Congress Prize for American Fiction. (1931 – 2015)

Sorry for Your Trouble: Stories (Hardcover)

As They See 'Em: A Fan's Travels in the Land of Umpires (Paperback)