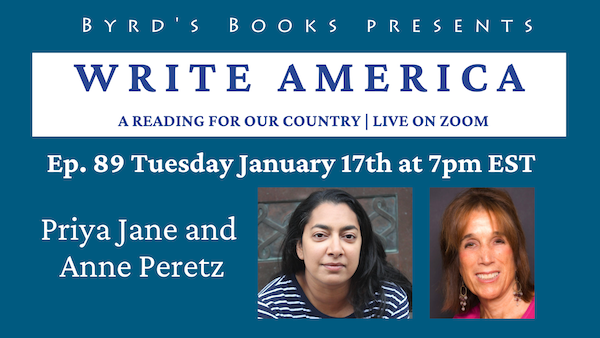 Join us for the eighty-ninth episode of Write America on Monday January 17th featuring Priya Jain and Anne Peretz as they read and discuss their works- intimating how the deep divisions in the country may be healed by the quiet power of art.

PRIYA JAIN is a journalist and writer whose essays and reportage have appeared in the New York Times Book Review, O: The Oprah Magazine, Slate, Salon, Bust, and other publications. Her creative work has received support from the Southampton Writer’s Conference, the Virginia Center for the Creative Arts, and Tin House. She lives in Brooklyn, NY, where she is currently at work on a narrative nonfiction history of her great-grandfathers’ roles in the Indian Independence movement. You can find her online at priyajain.net and on Twitter as @priyaraojain.

ANNE PERETZ is a family therapist who, while working in two housing projects in the mid-1980's, founded a program now known as Parenting Journey to assist struggling families who lacked the necessary resources to face great challenges.

Peretz found she had a gift for reaching across generations, as well as across class, race, and ethnicity. With a talented team, she created innovative techniques and therapeutic interventions which were successful enough to be taught to a wider audience. Parenting Journey expanded its training program and carefully crafted curricula to over five hundred locations, reaching thousands of families and several thousand facilitators in the United States, Burundi, and Guatemala.

Peretz has received awards and distinction from prestigious organizations such as The Alliance for Mentally Ill of Massachusetts, Phillips Brooks Housing Association, Harvard University, On The Rise Inc., and from the cities of Somerville and Cambridge.

Opening Up: The Parenting Journey (Paperback)