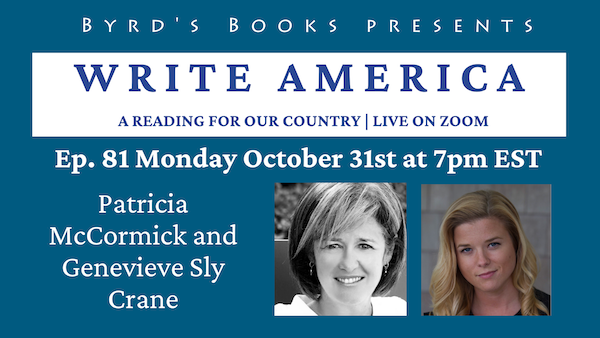 Join us for the eighty-first episode of Write America on Monday October 31st featuring Patricia McCormick and Genevieve Sly Crane as they read and discuss their works- intimating how the deep divisions in the country may be healed by the quiet power of art.
This event is free to attend- please use zoom link below. Your purchase of a book helps support this program - see below for book details.

PATRICIA MCCORMICK, a two-time National Book Award finalist, is the author of several critically acclaimed novels – including Never Fall Down, the true story of a boy who survived the Killing Fields of Cambodia by playing music for the Khmer Rouge, and SOLD, a moving account of sexual trafficking. She is also the co-author of I am Malala, the story of Malala Yousafzai, the girl who was shot by the Taliban in her fight for education.

Her books have been named to the New York Times Notable Books list, Publishers Weekly Best Books list, NPR’s Best Books list and iTunes Best Books lists. SOLD, featuring Gillian Anderson, was released as a feature film on April 1, 2016. Her book, The Plot to Kill Hitler, was published by Balzer + Bray, an imprint of HarperCollins, in September 2016. It was named a Publisher’s Weekly Top Ten. Her first picture book, Sgt. Reckless, the True Story of the Little Horse Who Became a Hero, came out in the fall of 2017. She attended Rosemont College, the Columbia University Graduate School of Journalism and has an MFA from the New School. She lives in New York.

GENEVIEVE SLY CRANE  is a graduate of the University of Massachusetts (B.A. English, 2010) and Stony Brook Southampton, (M.F.A. Creative Writing and Literature, 2013). Her first novel,  Sorority,   earned a Publisher's Weekly  starred review. She is the recipient of the 2020 Whiting Award for fiction. Her 2017 story, "Endings, Bright and Ugly," was a finalist for the American Short(er) Fiction Prize. Her upcoming novel is due for publication through Simon and Schuster in 2023.

I Am Malala: How One Girl Stood Up for Education and Changed the World (Young Readers Edition) (Paperback)

By Malala Yousafzai, Patricia McCormick (With)
$10.99

Sergeant Reckless: The True Story of the Little Horse Who Became a Hero (Paperback)