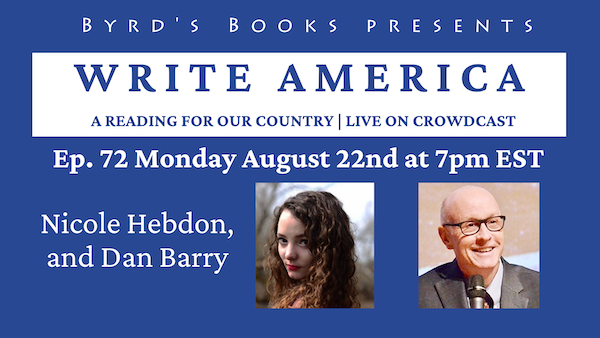 Join us for the seventy- second episode of Write America on Monday August 22nd featuring Nicole Hebdon, and Dan Barry as they read and discuss their works- intimating how the deep divisions in the country may be healed by the quiet power of art.

Nicole Hebdon's fiction has been published in The Kenyon Review, The New Haven Raven, The New Ohio Review, and The Antigonish Review among other places. Most recently, she was published in Carve Zine and Joyland Magazine. She is currently working on a collection of speculative short stories as well as a horror novel.

Dan Barry, a senior writer at The New York Times, is a graduate of St. Bonaventure University and New York University. He shared a 1994 Pulitzer Prize as a member of an investigative team at the Providence Journal, and since then has twice been a nominated Pulitzer finalist for feature writing.  His other honors include a George Polk Award, two American Society of Newspaper Editors Awards, the Mike Berger Award from the Columbia University Graduate School of Journalism, and a Best American Newspaper Narrative Award. He is the author of Pull Me Up: A Memoir; City Lights, a collection of his “About New York” columns; Bottom of the 33rd: Hope, Redemption, and Baseball’s Longest Game, which won the 2012 PEN/ESPN Award for Literary Sportswriting; The Boys in the Bunkhouse: Servitude and Salvation in the Heartland; and This Land: America, Lost and Found, a collection of his national columns.

(Carla Caglioti has been re-scheduled for our November 21st episode)

Pull Me Up: A Memoir (Paperback)

The Boys in the Bunkhouse: Servitude and Salvation in the Heartland (Paperback)