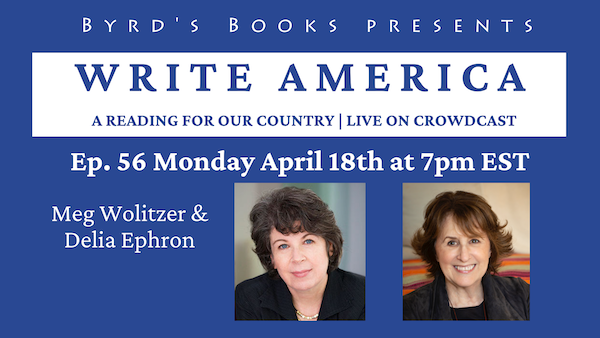 Join us for the fifty-sixth episode of Write America on Monday April 18th featuring Meg Wolitzer and Delia Ephron as they read and discuss their works- intimating how the deep divisions in the country may be healed by the quiet power of art.

MEG WOLITZER’s many novels include The Female Persuasion, The Interestings, The Ten-Year Nap, and The Wife, which was made into a film that garnered Glenn Close an Academy Award nomination. Wolitzer, who has also written books for young readers, was guest editor of The Best American Short Stories 2017.  She co-founded and co-directs BookEnds, a yearlong, non-degree intensive in the novel, as part of the MFA program in Creative Writing at Stony Brook Southampton.

DELIA EPHRON is a best-selling author, screenwriter, essayist, and playwright. Her novels include the New York Times best seller Siracusa.  She has written books of essays and humor, including How To Eat Like A Child. Her many movie credits include “You’ve Got Mail” and “The Sisterhood of the Traveling Pants.” “Her play, “Love, Loss, and What I Wore,” written with her sister Nora Ephron (based on the book by Ilene Beckerman), ran for two years off Broadway and has been performed all over the world. Her memoir Left On Tenth : A Second Chance at Life is published this month by Little Brown.

Left on Tenth: A Second Chance at Life: A Memoir (Hardcover)

The Female Persuasion: A Novel (Paperback)