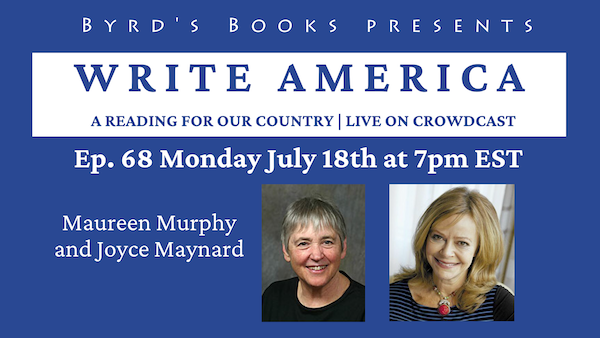 Join us for the sixty-eighth episode of Write America on Monday July 18th featuring Maureen Murphy, and Joyce Maynard as they read and discuss their works- intimating how the deep divisions in the country may be healed by the quiet power of art. Richard Sandomir is unable to join us this week.

MAUREEN MURPHY is Professor Emerita of Teaching, Learning and Technology at Hofstra University. She was the Director of the Secondary English Program and Co-Director of the University’s Irish Studies Program.  She served as the Dean of the School of Education and Allied Human Services from 2005-2008 and was the University’s Dean of Students for more than a decade. She has also been the Vice-President of the New York State English Council.

Murphy was the Director of the Great Irish Famine Curriculum Project for the New York State Department of Education.  The Curriculum won the Project Excellence Award from the National Council of Social Studies in 2002.  Murphy is the historian of the Great Irish Famine Memorial in Battery Park City.  She is the author of Compassionate Stranger, the biography of Asenath Hatch Nicholson, the American traveler who walked through Ireland on the eve of the Great Irish Famine and spent the terrible winter of 1847-48 in the west of Ireland trying to do what she could for famine relief.  Murphy has also edited Nicholson’s book:  Ireland’s Welcome to the Stranger and Annals of the Famine. Her current project is a biography of Charlotte Grace O’Brien who inspired the Mission of Our Lady of the Rosary for the Protection of Irish Immigrant Girls, the agency that looked after more than 100,000 Irish immigrant girls.

A past-president of the American Conference for Irish Studies and a past Chair of the International Association for the Study of Irish Literatures, she also served as one of the five senior editors of the Dictionary of Irish Biography.

Murphy has written more than 100 articles and book chapters and delivered more than 300 lectures in eighteen countries.  She held a Fulbright Fellowship in Ireland in 1965-66, was a State Department Lecturer in Egypt in 1993 and a Fellow in the Humanities Institute at University  College, Dublin.  Murphy was awarded an honorary Doctor of Human Letters degree from the State University of New York in 2002 and an honorary degree by the National University of Ireland in 2011l  She won the President of Ireland’s Distinguished Service Award for the Irish Abroad in 2015.

A native of New Hampshire, JOYCE MAYNARD began publishing her stories in magazines when she was thirteen years old.  She first came to national attention with the publication of her New York Times cover story, “An Eighteen Year Old Looks Back on Life”, in 1972, when she was a freshman at Yale. Since then, she has been a reporter and columnist for The New York Times, a syndicated newspaper columnist whose “Domestic Affairs” column appeared in over fifty papers nationwide, a regular contributor to NPR and national magazines including Vogue, The New York Times Magazine, and many more. She is a longtime performer with The Moth. Joyce Maynard is the author of eighteen books, including the New York Times bestselling novel, Labor Day and To Die For (both adapted for film), Under the Influence and the memoirs, At Home in the World  and The Best of Us.  Her latest novel, Count the Ways —the story of a marriage and a divorce, and the children who survived it—was published in July, 2021. She is currently at work on a book about her return to Yale University forty-eight years after dropping out at age 18. Maynard is a fellow of the MacDowell Colony and Yaddo. She is the founder of Write by the Lake, a week-long workshop on the art and craft of memoir, held every year since 2001 at Lake Atitlan, Guatemala.

Count the Ways: A Novel (Paperback)