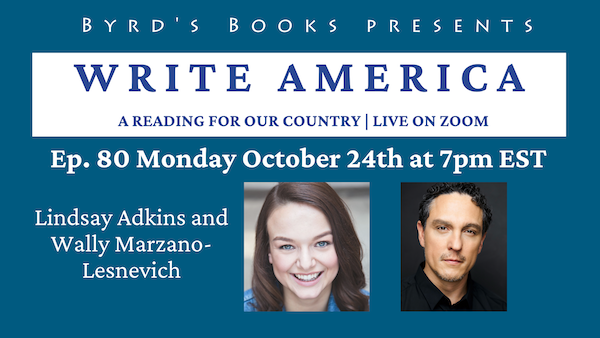 Join us for the eightieth episode of Write America on Monday October 24th featuring Lindsay Adkins and Wally Marzano-Lesnevich as they read and discuss their works- intimating how the deep divisions in the country may be healed by the quiet power of art.
This event is free to attend- please use zoom link below.

We are now hosting our episodes on Zoom, rather than Crowdcast. This will make it easier on the authors and poets who are, by and large, more familiar with Zoom than Crowdcast. We will have one set of links a month to start out- see below. Your purchase of a book helps support this program.

LINDSAY ADKINS graduated from The University of Hartford with a BA in English and a BFA in Musical Theater, and moved from her home state of Massachusetts to New Jersey to work with Penguin Random House in New York City, where she spent over five years in publishing. She then earned my M.F.A. in Creative Writing and Literature from Stony Brook University in Southampton, where she taught creative writing courses to undergraduates. She has also taught 7th grade Language Arts, and currently works as a tutor, mentor, and coach helping kids and teens grow as readers and writers. Her written work has appeared in Narrative, Electric Lit, Frontier Poetry, So to Speak Journal, Sugar House Review, The Southampton Review, Sequestrum, Typehouse Literary Magazine, Muse/A Journal, and others. She is a recipient of the Amy Award from Poets & Writers, the Phyllis B. Abrahms Award in Poetry, and a fellowship from the Martha's Vineyard Institute of Creative Writing.

WALLY MARZANO-LESNEVICH : Wally's debut feature Almost Paris, which he wrote, starred in and produced, premiered at the Tribeca Film Festival, and is available from Freestyle Digital Media. The film received the Audience Choice Award at the Beaufort International Film Festival and Best Screenplay at the Golden Door Film Festival, among other awards. Amongst his forthcoming projects is The Problem With People, co-written with actor/comedian Paul Reiser and currently in pre-production with Pull the Trigger Ltd., and Half Plus Seven, co-written with Lindsay Adkins, which is in development at Angelina Pictures.

Born in New York City and raised in Tenafly, New Jersey, Wally is a graduate of the BFA program at the Mason Gross School of the Arts, Rutgers University. As a filmmaker and actor his films have screened at numerous festivals, including the Barrymore Film Center, Beaufort, Bergen, Chelsea, Cinemonde, Coney Island, Festival of Cinema NYC, Garden State, Golden Door, Hill Country, Horror Hound, In the Cut, Kansas, Long Island, Nantucket, Northeast, Santa Fe, Seattle, Woods Hole, Venezia Shorts Italy, and others. He has also appeared extensively on-stage at a variety of regional playhouses and in New York City.