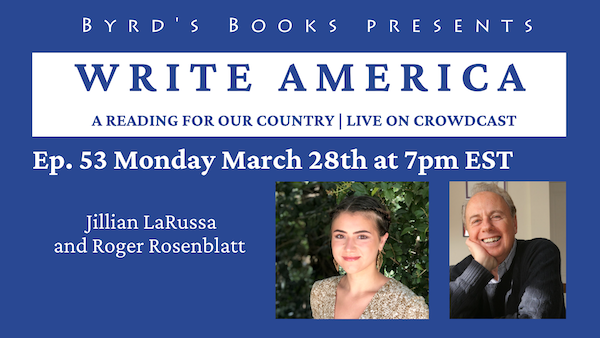 Join us for the fifty- third episode of Write America on Monday March 28th featuring Jillian LaRussa and Roger Rosenblatt as they read and discuss their works- intimating how the deep divisions in the country may be healed by the quiet power of art.

JILLIAN LARUSSA is a writer, educator, and artist based on Long Island. She received her MFA in Creative Writing and Literature from Stony Brook University and currently teaches English at Monroe College. Her work has appeared in The Breakwater Review. She refuses to walk if she can roller skate instead and has fallen in love with every abandoned building she's seen.

ROGER ROSENBLATT whose work has been published in 14 languages, is the author of five New York Times  Notable Books of the Year, and three Times  bestsellers, including the memoirs Kayak  Morning , The Boy Detective and Making Toast , originally an essay in the New Yorker. The Story I Am, a collection on writing and the writing life was published in April of 2020 and Cold Moon: On Life, Love, and Responsibility was published in October.  He has also written seven off-Broadway plays, notably the one-person Free Speech in America, that he performed at the American Place Theater, named one of the Times’s  “Ten Best Plays of 1991.” In 2019, The Bay Street Theater in Sag Harbor produced "Lives in the Basement, Does Nothing," his one-person musical play about the writing life, for which he played jazz piano.

The Distinguished Professor of English and Writing at Stony Brook, he formerly held the Briggs-Copeland appointment in creative writing at Harvard, where he earned his Ph.D. In 1985, he was on the short list for NASA’s Journalist in Space, before the Challenger shuttle tragedy ended the program. Among his honors are two George Polk Awards; the Peabody, and the Emmy, for his essays at Time magazine and on PBS; a Fulbright to Ireland, where he played on the Irish International Basketball Team; seven honorary doctorates; the Kenyon Review Award for Lifetime Literary Achievement; and the President’s Medal from the Chautauqua Institution for his body of work.