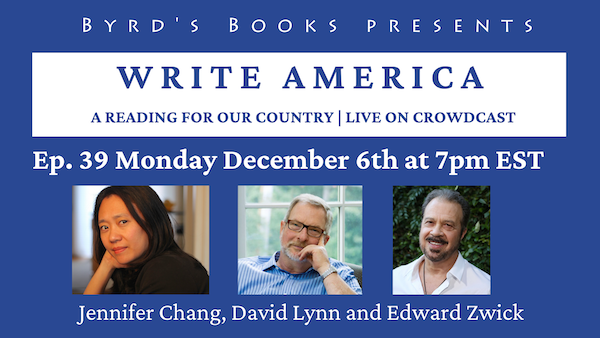 Join us for the thirty-ninth episode of Write America featuring Jennifer Chang, David Lynn and Edward Zwick as they read and discuss their works intimating how the deep divisions in the country may be healed by the quiet power of art.

This event is free to attend. Registration required. Your purchase of a book helps support this program - see below for book details.

JENNIFER CHANG: Poet and scholar Jennifer Chang was born in New Jersey. She earned her MFA and PhD from the University of Virginia and teaches at George Washington University. She is the author of two books of poetry, The History of Anonymity and Some Say the Lark.

Chang’s lyrical poems often explore the shifting boundaries between the outer world and the self. Chang’s debut poetry collection, The History of Anonymity (2008), was selected for the Virginia Quarterly Review’s Poetry Series and was a finalist for the Shenandoah/ Glasgow Prize for Emerging Writers. In a review of The History of Anonymity for the Boston Review, critic Kristina Marie Darling observed, “While formally diverse, the collection is unified by an ongoing engagement with the natural world, with Chang often presenting forests, rivers, and vast seaside landscapes as loci for her speakers’ search for self-knowledge and authenticity.” Speaking to the “emotional landscapes” of myths and fairy tales that surface occasionally in her poems, Chang stated in a 2008 interview on Critical Mass (the blog of the National Book Critics Circle board of directors): “As a scholar, I don’t trust autobiography, and as a lyric poet, I don’t trust narrative: both enforce a coherence that reveals more about the writer’s motives at the moment rather than the life or story being told. What I do trust is mystery; I trust confusion.”
She co-chairs the advisory board of Kundiman, a nonprofit organization that supports Asian American literature. She lives in Washington, D.C

DAVID LYNN is editor emeritus of the Kenyon Review, an international journal of literature, culture and the arts, since 1994. As an author, he received a 2016 O. Henry Award for “Divergence.” His latest collection, Children of God: New & Selected Stories, has been published in 2019 by Braddock Avenue Books. An earlier volume, Year of Fire, was published in 2006 by Harcourt. In a review, Publisher’s Weekly said that “the stories of this collection occupy the gray borderland where betrayal mixes with trust, violence with affection, humiliation with lust. The effect is quietly haunting.” And the New York Times said, [Lynn] “feels his way toward tentative, glancing resolutions that avoid glib epiphanies and leave his characters, like the professor in ‘Life Sentences,’ ‘numb and sad and lonely . . . a still center as the emotional chaos of these people swirled about him, destroying so much.’”

David Lynn is also the author of the novel Wrestling with Gabriel, an earlier collection of stories, Fortune Telling, and The Hero’s Tale: Narrators in the Early Modern Novel, a critical study. His stories and essays have appeared in magazines and journals in America, England, India, and Australia. Other awards include the Glimmer Train Short Story Prize 2015, the Frank O’Connor International Short Story Award Finalist, and the Ohioana Library Association Award for Editorial Excellence.

David Lynn lives in Gambier, Ohio with his wife, Wendy Singer, a distinguished historian of India. He is also Professor of English at Kenyon College.

Edward M. Zwick (born October 8, 1952) is an American filmmaker and producer of film and television. He has worked primarily in the comedy-drama and epic historical film genres, including About Last Night, Glory, Legends of the Fall, and The Last Samurai. He is also the co-creator of the television series thirtysomething and Once and Again.

Zwick's body of work has earned numerous accolades, including an Academy Award and BAFTA Award for Best Picture as a producer, and Primetime Emmy Awards for Outstanding Drama Series, Outstanding Writing in a Limited Series, and Outstanding Dramatic Special. He has additionally been nominated for multiple Golden Globe Awards.

Some Say the Lark (Paperback)