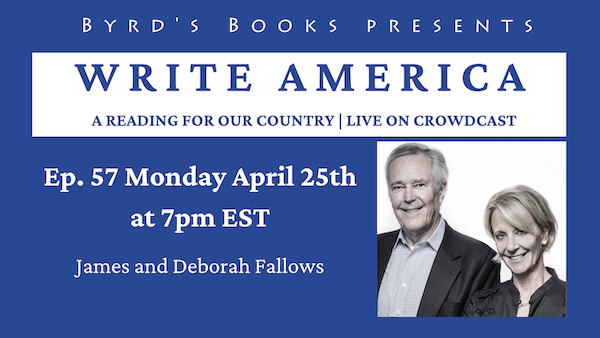 Join us for the fifty-seventh episode of Write America featuring Deborah and James Fallows as they read and discuss their works intimating how the deep divisions in the country may be healed by the quiet power of art.
This event is free to attend. Register here.
About the authors:

DEBORAH FALLOWS is a writer and linguist. She has written extensively on language, education, families and work, China, and travel for The Atlantic, National Geographic, Slate, The New York Times, The LA Times, The Washington Monthly, The Washington Post, and other publications. She has been a fellow at New America and a senior research fellow at the Pew Research Center.

For four years, Deborah and her husband, writer James Fallows, crisscrossed the country in their small plane, reporting for The Atlantic on the civic and economic renewal of America’s towns. Their book about the project, Our Towns: A 100,000 Mile Journey into the Heart of America, a New York Times bestseller, was published by Pantheon in May, 2018, and in paperback by Vintage books one year later. The HBO documentary, Our Towns, based on the book, was released in April, 2021 and is available streaming on HBO MAX. These are the basis for Our Towns Civic Foundation, launched in April, 2021. (OurTownsFoundation.org)

Deborah has served as a director of data architecture for Oxygen Media. Previously, she was Assistant Dean and Assistant Director of Admissions at Georgetown University. Her 2010 book, Dreaming in Chinese: Mandarin Lessons in Life, Love, and Language, is based on her 3-year experience living and working in China. She earned a BA from Harvard College and a PhD in linguistics from the University of Texas.

Deborah Fallows and her husband live in Washington, DC. They have two married sons and five grandchildren.

JAMES FALLOWS has been a longtime writer for The Atlantic magazine. He has reported from around the world since the late 1970s, including extended assignments in China, Japan, and Southeast Asia, and within the United States in Texas, Washington state, and California. He has written 12 books and won the American Book Award, the National Magazine Award, and a documentary Emmy. He has also done extensive commentary on National Public Radio. He now hosts a Substack site, called Breaking the News.

For the past several years he and his wife, the writer Deborah Fallows, have been traveling through smaller-town America and reporting on innovation of all sorts. Their book on the project, Our Towns: A 100,000 Mile Journey into the Heart of America, a New York Times bestseller, was published by Pantheon in May, 2018. The HBO documentary, Our Towns, based on the book, was released in April, 2021 and is available streaming on HBO MAX. These are the basis for Our Towns Civic Foundation, launched in April, 2021. (OurTownsFoundation.org)

James Fallows grew up in Redlands, California, studied American history and literature at Harvard, studied economics at Oxford as a Rhodes scholar, and once worked in the White House as President Carter’s chief speechwriter. He was recently elected to the American Academy of Arts and Sciences. He is a licensed, instrument-rated pilot.

Our Towns: A 100,000-Mile Journey into the Heart of America (Paperback)