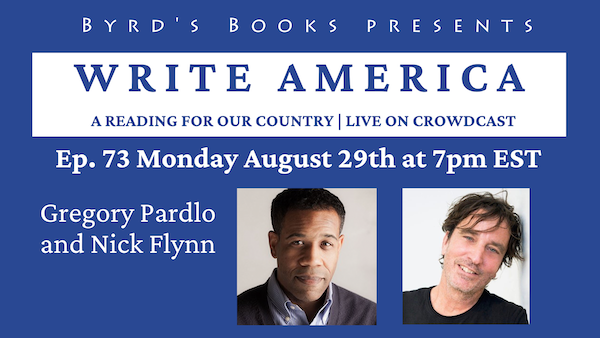 Join us for the seventy-third episode of Write America on Monday August 29th featuring Gregory Pardlo and Nick Flynn as they read and discuss their works- intimating how the deep divisions in the country may be healed by the quiet power of art.

Gregory Pardlo was born in Philadelphia and grew up in Willingboro, New Jersey. He is the author of Totem (2007), winner of the APR/Honickman First Book Prize, and Digest (2014), winner of the Pulitzer Prize for Poetry. The Pulitzer judges cited Pardlo’s “clear-voiced poems that bring readers the news from 21st Century America, rich with thought, ideas and histories public and private.” In 2017, Pardlo was awarded a Guggenheim Fellowship.

Pardlo’s poems, reviews, and translations have been widely published and are noted for “language simultaneously urban and highbrow… snapshots of a life that is so specific it becomes universal.” He is also the author of Air Traffic: A Memoir of Ambition and Manhood in American (2018). The book, which weaves together Pardlo’s family history—including his father’s role in the 1981 air traffic controller’s strike—with a larger exploration of Blackness and masculinity in American culture, was named to numerous top-ten lists, including the BBC, Vogue, the New Jersey Monthly, and the New York Times. Pardlo is poetry editor for the Virginia Quarterly Review and teaches in the MFA program at Rutgers University, Camden. He lives in Brooklyn.

NICK FLYNN is the author of This Is the Night Our House Will Catch Fire and three previous memoirs, including the PEN/Joyce Osterweil Award–winning Another Bullshit Night in Suck City, and four volumes of poetry. A professor on the creative writing faculty at the University of Houston, he lives in Brooklyn, New York.

Air Traffic: A Memoir of Ambition and Manhood in America (Paperback)

This Is the Night Our House Will Catch Fire: A Memoir (Paperback)

Another Bullshit Night in Suck City: A Memoir (Paperback)