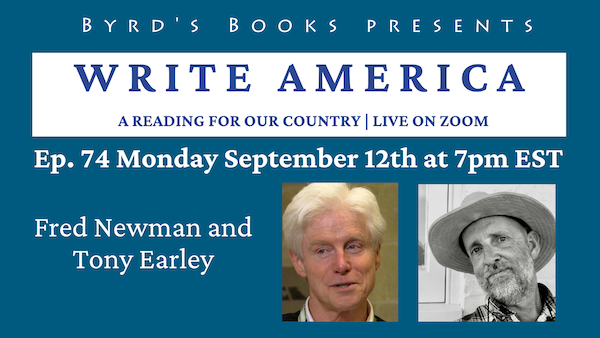 Join us for the seventy-fourth episode of Write America on Monday September 12th featuring Fred Newman and Tony Earley as they read and discuss their works- intimating how the deep divisions in the country may be healed by the quiet power of art.

This event is free to attend. Your purchase of a book helps support this program - see below for book details.

Fred Newman, is an American actor, comedian, composer, vocal SFX artist, and former talk show host. Newman was an actor and sound-effects artist on Garrison Keillor's live radio variety show A Prairie Home Companion. In an audience favorite feature of the program, Keillor tells an apparently impromptu story that is funny because it requires Newman to strain to supply rapid-fire sound effects for unusual occurrences and obscure animals.

Newman was featured in an interview with Jane Pauley on CBS Sunday Morning and the segment was nominated for an Emmy. He has also done character voices and sound effects in numerous film, television and video game credits, including Who Framed Roger Rabbit, Doug (as Skeeter Valentine, Porkchop, Mr. Dink, and other characters), Harry and the Hendersons, Gremlins, Munchies, Storybook World, Elmo's World as a special guest on the episode "Mouths", Wolf and Men in Black.

Tony Earley is the author of five books: Here We Are in Paradise, a collection of stories; the novels Jim the Boy and The Blue Star; and the personal essay collection Somehow Form a Family. His most recent book, Mr. Tall: a Novella and Stories, was a finalist for the Frank O’Connor International Short Story Prize. A winner of a National Magazine Award for fiction, he was named one of the twenty best writers of his generation by both Granta, in 1996, and The New Yorker in 1999. His fiction and/or nonfiction have appeared in Harper’s, Esquire, The New Yorker, The New York Times Book Review, Tin House, Best American Short Stories, New Stories from the South and many other magazines and anthologies. He is a native of Rutherford County, North Carolina and a graduate of Warren Wilson College and The University of Alabama. He lives in Nashville with his wife and daughters, where he is the Samuel Milton Fleming Professor of English at Vanderbilt University.

To join us in September, please use:

The Blue Star: A Novel (Paperback)