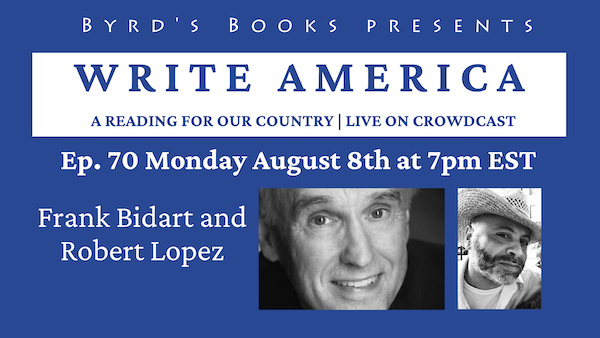 Join us for the seventieth episode of Write America on Monday August 8th featuring Frank Bidart and Robert Lopez as they read and discuss their works- intimating how the deep divisions in the country may be healed by the quiet power of art.

FRANK BIDART is the author of many collections of poetry, including Metaphysical Dog, Watching the Spring Festival, Star Dust, Desire, and In the Western Night: Collected Poems 1965-1990. He has won many prizes, including the Wallace Stevens Award, the Bollingen Prize for Poetry, and the National Book Critics Circle Award. His book Half-light: Collected Poems 1965-2016 won the 2018 Pulitzer Prize and the 2017 National Book Award. He lives in Cambridge, Massachusetts.

ROBERT LOPEZ is the author of three novels, Part of the World, Kamby Bolongo Mean River--named one of 25 important books of the decade by HTML Giant, All Back Full, and two story collections, Asunder and Good People. His fiction, nonfiction, and poetry has appeared in dozens of publications, including Bomb, The Threepenny Review, Vice Magazine, New England Review, The Sun, and the Norton Anthology of Sudden Fiction-Latino. A new book, A Better Class Of People, was published in March of this year. Dispatches from Puerto Nowhere, his first nonfiction book, will be published by Two Dollar Radio in March, 2023. He teaches at Stony Brook University and has previously taught at Columbia University, The New School, Pratt Institute, and Syracuse University.

A Better Class of People (Paperback)