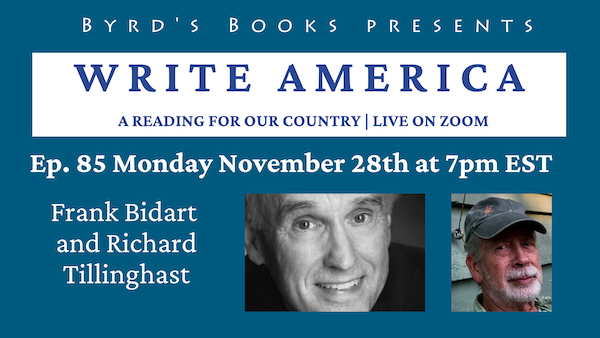 Join us for the eighty-fifth episode of Write America on Monday November 28th featuring Frank Bidart and Richard Tillinghast as they read and discuss their works- intimating how the deep divisions in the country may be healed by the quiet power of art.

FRANK BIDART is the author of many collections of poetry, including Metaphysical Dog, Watching the Spring Festival, Star Dust, Desire, and In the Western Night: Collected Poems 1965-1990. He has won many prizes, including the Wallace Stevens Award, the Bollingen Prize for Poetry, and the National Book Critics Circle Award. His book Half-light: Collected Poems 1965-2016 won the 2018 Pulitzer Prize and the 2017 National Book Award. He lives in Cambridge, Massachusetts.

RICHARD TILLINGHAST'S new collection, Blue If Only I Could Tell You, is the winner of the White Pine Press Poetry Prize. Blue If Only I Could Tell You is his thirteenth collection, in addition to five books of creative nonfiction. His poems have appeared in the American Poetry Review, The Atlantic, The New Yorker, Paris Review, The New Republic, The New Criterion, The Best American Poetry and elsewhere. The recipient of grants from the Guggenheim Foundation, the National Endowment for the Arts, the British Council, the Irish Arts Council, and the Bread Loaf Writers’ Conference, he lives in Hawaii and spends his summers in Sewanee, Tennessee.

Blue If Only I Could Tell You (Paperback)