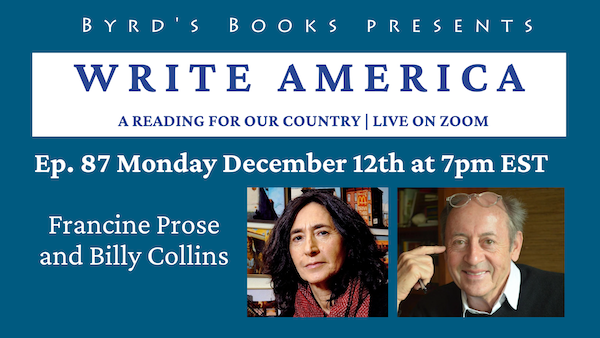 Join us for the eighty-seventh episode of Write America on Monday December 12th featuring Francine Prose and Billy Collins as they read and discuss their works- intimating how the deep divisions in the country may be healed by the quiet power of art.

FRANCINE PROSE is the author of twenty-one works of fiction including, the highly acclaimed Mister Monkey; the New York Times bestseller Lovers at the Chameleon Club, Paris 1932; A Changed Man, which won the Dayton Literary Peace Prize; and Blue Angel, which was a finalist for the National Book Award. Her works of nonfiction include the highly praised Anne Frank: The Book, The Life, The Afterlife, and the New York Times bestseller Reading Like a Writer, which has become a classic. The recipient of numerous grants and honors, including a Guggenheim and a Fulbright, a Director’s Fellow at the Center for Scholars and Writers at the New York Public Library, Prose is a former president of PEN American Center, and a member of the American Academy of Arts and Letters and the American Academy of Arts and Sciences.  Her latest book Cleopatra: Her History, Her Myth, was released November. She is a Distinguished Writer in Residence at Bard College.

BILLY COLLINS is the author of twelve collections of poetry including The Rain in Portugal, Aimless Love, Horoscopes for the Dead, Ballistics, The Trouble with Poetry, Nine Horses, Sailing Alone Around the Room, Questions About Angels, The Art of Drowning, and Picnic, Lightning. He is also the editor of Poetry 180: A Turning Back to Poetry, 180 More: Extraordinary Poems for Every Day, and Bright Wings: An Illustrated Anthology of Poems About Birds. A former Distinguished Professor at Lehman College of the City University of New York, Collins served as Poet Laureate of the United States from 2001 to 2003 and as New York State Poet from 2004 to 2006. In 2016 he was inducted into the American Academy of Arts and Letters. His latest book of poems is Musical Tables: Poems, released in November.