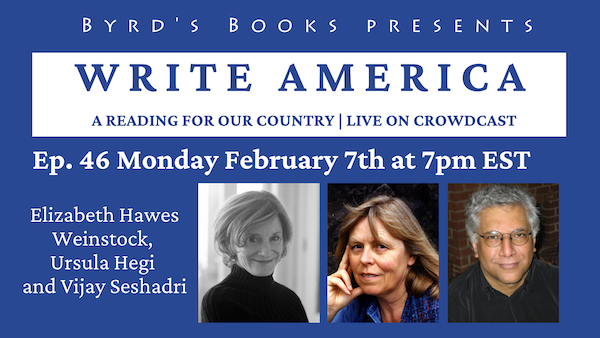 Join us for the forty- sixth episode of Write America featuring Elizabeth Hawes Weinstock, Ursula Hegi and Vijay Seshadri as they read and discuss their works intimating how the deep divisions in the country may be healed by the quiet power of art.

VIJAY SESHADRI is the author of Wild Kingdom (1996); The Long Meadow (2003), which won the James Laughlin Award; and 3 Sections (2013), which won the Pulitzer Prize in Poetry. The Pulitzer committee described the book as “a compelling collection of poems that examine human consciousness, from birth to dementia, in a voice that is by turns witty and grave, compassionate and remorseless.”

Seshadri has received fellowships from the New York Foundation for the Arts, the NEA, and the Guggenheim Foundation. He has worked as an editor at the New Yorker and has taught at Sarah Lawrence College, where he currently directs the graduate non-fiction writing program. His new book of poetry, That Was Now, This Is Then: Poems, was published in 2020 and came out in paperback in January of this year.

ELIZABETH HAWES WEINSTOCK  is an American writer of biography, journalism, and creative nonfiction. Her first book New York New York: How the Apartment House Transformed the Life of the City (Knopf, 1993) was nominated for a Pulitzer and named a New York Times Book of the Year. Her biography-memoir Camus, A Romance (Grove Press, 2009) chronicles the life of Nobel Prize-winning French-Algerian writer Albert Camus, along with her own experience trying to follow in his footsteps. It was the subject of both a Center for Fiction event and a joint PEN/Center for Transformative Lives event at New York University.

URSULA HEGI is the author of over a dozen books, including Stones from the River, Children and Fire, Floating in My Mother's Palm, and Tearing the Silence. A German-born writer, she immigrated to the United States at eighteen. She has served as juror for the National Book Award and the National Book Critics Circle, and is the recipient of more than thirty grants and awards. Ursula lives with her family on Long Island and has taught writing at Stony Brook, USC Irvine, and Barnard College.

That Was Now, This Is Then: Poems (Paperback)

The Patron Saint of Pregnant Girls: A Novel (Paperback)

Stones from the River (Paperback)