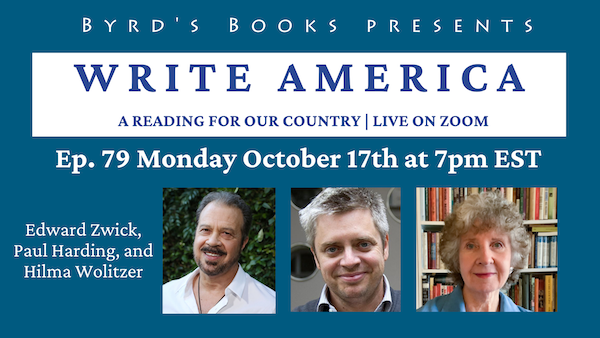 Join us for the seventy-ninth episode of Write America on Monday October 17th featuring Edward Zwick, Paul Harding, and Hilma Wolitzer as they read and discuss their works- intimating how the deep divisions in the country may be healed by the quiet power of art.
This event is free to attend- please use zoom link below. Your purchase of a book helps support this program - see below for book details.

Edward M. Zwick is an American filmmaker and producer of film and television. He has worked primarily in the comedy-drama and epic historical film genres, including About Last Night, Glory, Legends of the Fall, and The Last Samurai. He is also the co-creator of the television series thirtysomething and Once and Again.

Zwick's body of work has earned numerous accolades, including an Academy Award and BAFTA Award for Best Picture as a producer, and Primetime Emmy Awards for Outstanding Drama Series, Outstanding Writing in a Limited Series, and Outstanding Dramatic Special. He has additionally been nominated for multiple Golden Globe Awards.

PAUL HARDING is the author of two prior novels about multiple generations of a New England family: Enon and the Pulitzer Prize-winning Tinkers. His newest book, This Other Eden, published by WW Norton will be released in January of 2023. He teaches at Stony Brook Southampton.

HILMA WOLITZER is the author of several novels, including An Available Man, Summer Reading, The Doctor’s Daughter, Hearts, Ending, and Tunnel of Love, as well as a nonfiction book, The Company of Writers. She is a recipient of Guggenheim and NEA fellowships and an Award in Literature from the American Academy of Arts and Letters. Her short stoy collection, Today a Woman Went Mad in the Supermarket: Stories, now in hardcover will be released in paperback next month. She has taught writing at the University of Iowa, New York University, and Columbia University.

This Other Eden: A Novel (Hardcover)

Today a Woman Went Mad in the Supermarket: Stories (Hardcover)

Today a Woman Went Mad in the Supermarket: Stories (Paperback)