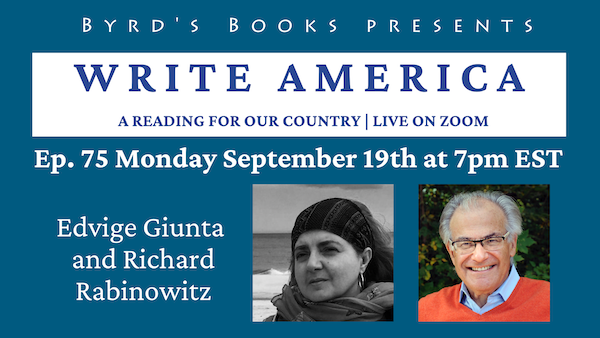 Join us for the seventy-fifth episode of Write America on Monday September 19th featuring Edvige Giunta and Richard Rabinowitz as they read and discuss their works- intimating how the deep divisions in the country may be healed by the quiet power of art.

EDVIGE GIUNTA: Edvige Giunta is the author of Writing with an Accent: Contemporary Italian American Women Authors and coeditor of several anthologies, including The Milk of Almonds: Italian American Women Writers on Food and Culture and Personal Effects: Essays on Memoir, Teaching, and Culture in the Work of Louise DeSalvo. Her creative nonfiction appears in Creative Nonfiction, Mutha Magazine, Jellyfish Review, December, and other publications. Talking to the Girls: Intimate and Political Essays on the Triangle Shirtwaist Factory Fire, coedited with Mary Anne Trasciatti, has been published in 2022 by New Village Press. She is Professor of English at New Jersey City University where she teaches memoir, flash, and a course on the Triangle fire.

Richard Rabinowitz tells stories of the American past through museum exhibitions, films, family histories, and memoirs. As president of American History Workshop, he has planned and curated dozens of new museums and installations over the course of a half-century in every corner of the United States. His projects include the Birmingham Civil Rights Institute, the National Underground Railroad Freedom Center in Cincinnati, the Lower East Side Tenement Museum, and the Smithsonian’s National Museum of African American History and Culture. He curated and wrote six blockbuster exhibitions at the New-York History Society on “Slavery in New York” and “Revolutions: The Atlantic World Reborn.”

His writings include The Spiritual Self in Everyday Life, a history of religious experience in 19th-century New England; Curating America: Journeys through the Storyscapes of the American Past, a rendering of the transformation of public history since the 1960s; and Objects of Love and Regret: A Brooklyn Story, to be published by Harvard University Press in the fall of 2022. His work focuses on the sensory, immediate, tangible, material, intimate, and local dimensions of the people he is interpreting—among them salmon cannery workers in the Pacific Northwest, enslaved people on antebellum Louisiana sugar plantations, and women garment workers in New York sweatshops.

To join us in September, please use:

Talking to the Girls: Intimate and Political Essays on the Triangle Shirtwaist Factory Fire (Paperback)

Curating America: Journeys Through Storyscapes of the American Past (Hardcover)

Objects of Love and Regret: A Brooklyn Story (Hardcover)