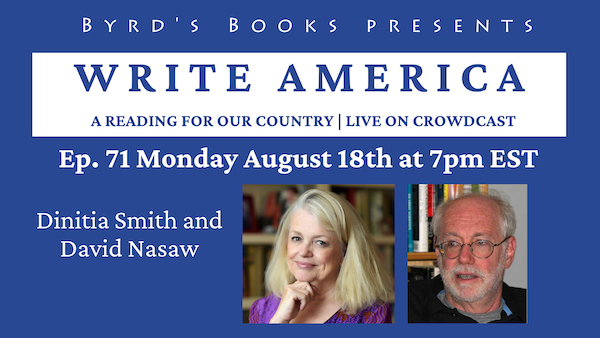 Join us for the seventy-first episode of Write America on Monday August 15th featuring Dinitia Smith and David Nasaw as they read and discuss their works- intimating how the deep divisions in the country may be healed by the quiet power of art.

Dinitia Smith is the author of five novels and numerous short stories. Her latest novel,  The Prince,  (March 1, 2022), is a contemporary retelling of Henry James' The Golden Bowl.  For eleven years, Dinitia was a reporter at the New York Times where she wrote about literature and the arts.    She is also an Emmy Award winning filmmaker. A drama she wrote and directed, Passing Quietly Through,  was one of the first films by a woman to be chosen for the New York Film Festival.

Professor David Nasaw is the Arthur M. Schlesinger, Jr. Professor of History Emeritus at the CUNY Graduate Center and a past president of the Society of American Historians.  He received his Ph.D. degree in history from Columbia University.

The Last Million: Europe's Displaced Persons from World War to Cold War was published by Penguin Press in hardcover in September, 2020 and in paperback in September 2021.  It was named a best book of the year by National Public Radio and History Today.

Nasaw’s previous book, The Patriarch: The Remarkable Life and Turbulent Times of Joseph P. Kennedy, was chosen by the New York Times as one of the Five Best Non-Fiction Books of the Year and was a Pulitzer Prize Finalist in Biography.

David Nasaw is also the author of Andrew Carnegie, a Pulitzer Prize Finalist, a New York Times Notable Book of the Year and the winner of the New-York Historical Society’s American History Book Prize;  The Chief: The Life of William Randolph Hearst which was awarded the Bancroft Prize for History, the J. Anthony Lukas Book Prize for Non-Fiction, the Ambassador Book Prize for Biography, and the Sperber Prize for Biography; Going Out: The Rise and Fall of Public Amusements; and Children of the City: At Work and At Play, which was the source for Newsies, the film and musical.

The Prince: A Novel (Hardcover)

The Patriarch: The Remarkable Life and Turbulent Times of Joseph P. Kennedy (Paperback)