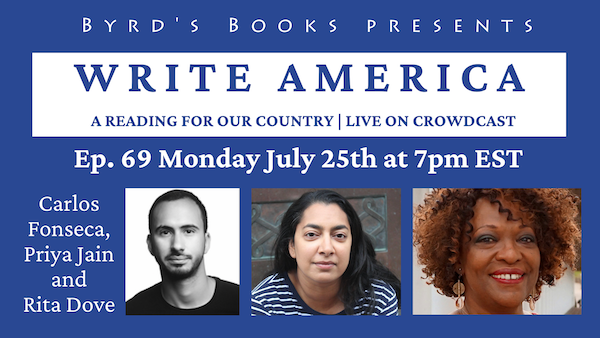 Join us for the sixty-ninth episode of Write America on Monday July 25th featuring Carlos Fonseca, Priya Jain and Rita Dove as they read and discuss their works- intimating how the deep divisions in the country may be healed by the quiet power of art.

CARLOS FONSECA was born in 1987 in San José, Costa Rica, and spent half of his childhood and adolescence in Puerto Rico. In 2016, he was named one of the twenty best Latin American writers born in the 1980s at the Guadalajara Book Fair, and in 2017 he was included in the Bogotá39 list of the best Latin American writers under forty. He is the author of the novel Colonel Lágrimas (Restless Books, 2016) and Natural History (Farrar, Straus and Giroux, 2019), and in 2018, he won the National Prize for Literature in Costa Rica for his book of essays, La lucidez del miope. He teaches at Trinity College, Cambridge, and lives in London.

PRIYA JAIN is a journalist whose essays and reporting about books and culture have appeared in The New York Times Book Review, Salon, Slate, O: the Oprah Magazine, Bust, and several other publications. She holds an MA in journalism from NYU and an MFA in creative writing from Stony Brook University. Her creative writing has received support from the Tin House Writers Workshop, Gotham Writers, and the Virginia Center for the Creative Arts. She is currently at work on a novel.

RITA DOVE was born in Akron, Ohio in 1952. A 1970 Presidential Scholar, she attended Miami University of Ohio, Universität Tübingen in Germany and the University of Iowa. In 1987 she received the Pulitzer Prize in poetry, and from 1993-1995 she served as U.S. Poet Laureate. Author of a novel, a short story collection, a book of essays, and ten volumes of poetry -- most recently Sonata Mulattica, her poetic treatise of 19th century Afro-European violin prodigy George Bridgetower (winner of the 2010 Hurston/Wright Legacy Award) and Collected Poems 1974-2004 (winner of a 2017 NAACP Image Award) -- she also edited The Penguin Anthology of 20th-Century American Poetry (2011) and, in 2018/19, a weekly poetry column for The New York Times Magazine. Her song cycle Seven for Luck, with music by John Williams, was premiered by the Boston Symphony, and her play The Darker Face of the Earth had successful runs at the Oregon Shakespeare Festival, the Kennedy Center in Washington and the Royal National Theatre in London, among other venues. Rita Dove’s most recent volume of poems, Playlist for the Apocalypse, came out in August 2021, and a new song cycle, Standing Witness, with music by Richard Danielpour, has been performed at Tanglewood, the Kennedy Center, University of Chicago, and Middlebury College

Rita Dove’s numerous honors include the Heinz Award in the Arts and Humanities, Lifetime Achievement Medals from the Library of Virginia and the Fulbright Commission, the Wallace Stevens Award from the Academy of American Poets as well as 28 honorary doctorates, among           them from Yale and Harvard. In 1996 she received the National Humanities Medal from

President Clinton and in 2011 the National Medal of Arts from President Obama -- the only poet ever to receive both medals. She has served as president of the Association of Writers and Writing Programs (AWP) and as chancellor of the honor society Phi Beta Kappa. An elected member of the American Philosophical Society, the American Academy of Arts and Sciences and the American Academy of Arts and Letters, she is Henry Hoyns Professor of Creative Writing at the University of Virginia, where she has been teaching since 1989.

Playlist for the Apocalypse: Poems (Hardcover)