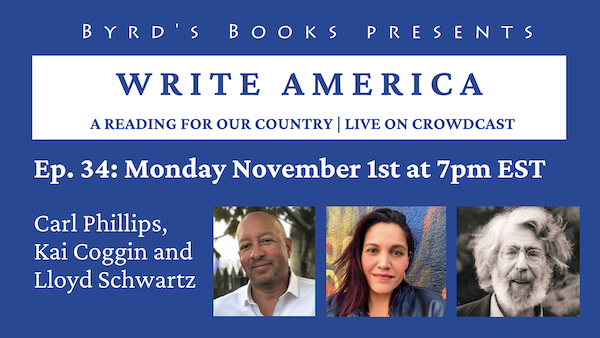 Join us for the thirty-fourth episode of Write America featuring Carl Phillips, Kai Coggin and Lloyd Schwartz as they read and discuss their works intimating how the deep divisions in the country may be healed by the quiet power of art.

CARL PHILLIPS: Referred to as “one of America’s most original, influential, and productive of lyric poets,” Carl Phillips is the author of a dozen books of poetry and two works of criticism. He was born in Everett, Washington in 1959, and his family moved frequently around the United States. He earned a BA from Harvard, an MAT from the University of Massachusetts, and an MA in creative writing from Boston University. Before teaching English at the university level, he taught Latin at several high schools. He is Professor of English at Washington University in St. Louis, where he also teaches creative writing. Phillips was elected a chancellor of the Academy of American Poets in 2006, and since 2011 he has served as the judge for the Yale Series of Younger Poets.

Phillips has also published works of criticism and translation. Graywolf Press has published two collections of his essays: The Art of Daring: Risk, Restlessness, Imagination (2014) and Coin of the Realm: Essays on the Life and Art of Poetry (2004). Oxford University Press published Phillips’s translation of Sophocles’s Philoctetes (2003).

KAI COGGIN (she/her) is the author of four poetry collections, most recently MINING FOR STARDUST (FlowerSong Press 2021) and INCANDESCENT (Sibling Rivalry Press 2019). She is a queer woman of color who thinks Black Lives Matter, a teaching artist in poetry with the Arkansas Arts Council, and the host of the longest running consecutive weekly open mic series in the country—Wednesday Night Poetry. Recently awarded the 2021 Governor’s Arts Award and named “Best Poet in Arkansas” by the Arkansas Times, her fierce and powerful poetry has been nominated four times for The Pushcart Prize, as well as Bettering American Poetry 2015, and Best of the Net 2016 and 2018. Her poems have appeared or are forthcoming in POETRY, Cultural Weekly, SOLSTICE, Bellevue Literary Review, TAB, Entropy, SWWIM, Split This Rock, Sinister Wisdom, Lavender Review, Tupelo Press, West Trestle Review, and elsewhere. Coggin is Associate Editor at The Rise Up Review. She lives with her wife and their two adorable dogs in the valley of a small mountain in Hot Springs National Park, Arkansas.

LLOYD SCHWARTZ: Born in Brooklyn, poet and Elizabeth Bishop scholar Lloyd Schwartz earned a BA at Queens College CCNY and a PhD at Harvard University. In his poems, Schwartz often uses a conversational frame to explore intimate and familial relationships. His collections of poetry include Little Kisses (2017), Cairo Traffic (2000), Goodnight, Gracie (1992), and These People (1981). His poetry has also been featured in the anthologies Best American Poetry (1991, 1994, 2019), The Best of the Best American Poetry (2013), and Essential Pleasures: A New Anthology of Poems to Read Aloud (2009). Schwartz is the editor of Prose: Elizabeth Bishop (2011) and coeditor of Elizabeth Bishop and Her Art (1983) and of the Library of America’s Elizabeth Bishop: Poems, Prose, and Letters (2008).

Schwartz also served as the classical music editor of the Boston Phoenix. Three-time winner of the American Society of Composers, Authors, and Publishers (ASCAP) Deems Taylor Awards, he has received a Professional Music Fraternity’s Radio and Television Award as well as support from the Amphion Foundation. Music In—and On—the Air (2013) offers a selection of his classical music criticism for the National Public Radio program Fresh Air.

Schwartz’s additional honors include a Pulitzer Prize for criticism, grants from the National Endowment for the Arts and the Somerville Arts Council, an Associates of the Boston Public Library Literary Lights Award, and a 2019 Guggenheim Foundation Fellowship in Poetry. Schwartz has served on the executive board of PEN New England and is Frederick S. Troy Professor of English at the University of Massachusetts in Boston, where he has served as director of the creative writing program. He lives in Somerville, Massachusetts, where he is poet laureate.

Who's on First?: New and Selected Poems (Phoenix Poets) (Paperback)