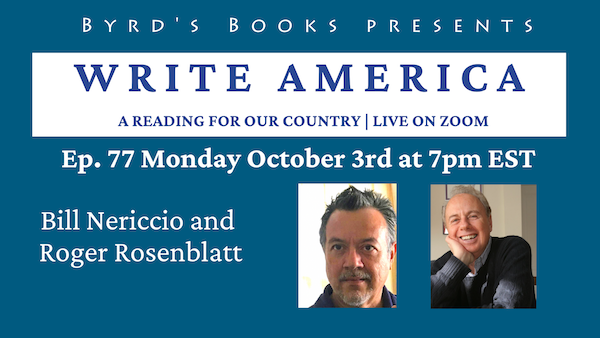 Join us for the seventy-seventh episode of Write America on Monday October 3rd featuring Bill Nericcio and Roger Rosenblatt as they read and discuss their works- intimating how the deep divisions in the country may be healed by the quiet power of art.

William "Memo" Nericcio, a Cultural Studies Professor from Laredo, Texas, and the Director of San Diego State University Press, began his career as a Latin Americanist focused on 20th century fiction by Carlos Fuentes, Rosario Castellanos, and Gabriel García Márquez. From his first Assistant Professorship at the University of Connecticut he moved to SDSU in 1991, where his work has expanded into critical studies of mass culture, streaming media, and Latinx fiction. With a BA in English from UT Austin, and a Ph.D. in Comparative Literature from Cornell University, Nericcio presently directs the MALAS Cultural Studies MA @SDSU. His latest book, co-authored with Frederick Luis Aldama, Talking #browntv: Latinas and Latinos on the Screen, appeared January 2020 from the Ohio State University Press. His best-known work is Tex[t]-Mex: Seductive Hallucinations of the “Mexican” in America, University of Texas Press, 2007.

Roger Rosenblatt, whose work has been published in 14 languages, is the author of 5 New York Times Notable Books of the Year, and 4 Times bestsellers. His honors include a Fulbright Scholarship, the 2015 Kenyon Review Literary Life Achievement award, 7 honorary doctorates, 2 George Polk awards, the Peabody and the Emmy. Kirkus Reviews said Roger "has excelled in nearly every literary form." UPI called him "a national treasure".  Cataract Blues, his new book, will be out in the late fall.

Zoom link for all October episodes:

Talking #browntv: Latinas and Latinos on the Screen (Paperback)