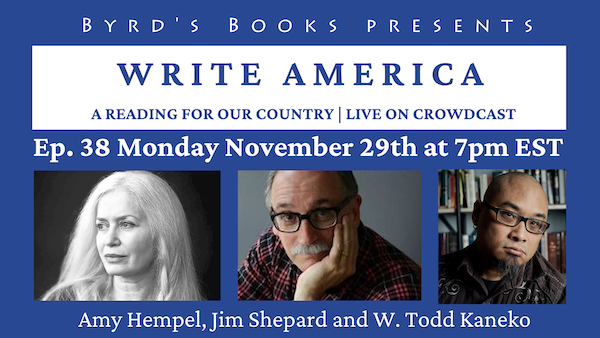 Join us for the thirty-eighth episode of Write America featuring Amy Hempel, Jim Shepard, and W. Todd Kaneko as they read and discuss their works intimating how the deep divisions in the country may be healed by the quiet power of art.
This event is free to attend, Registration required. Your purchase of a book helps support this program - see below for book details.

AMY HEMPEL is the author of Sing to It, The Dog of the Marriage, Tumble Home, At the Gates of the Animal Kingdom, Reasons to Live, and the coeditor of Unleashed. Her stories have appeared in Harper's, Vanity Fair, GQ, Tin House, The Harvard Review, The Quarterly, and have been widely anthologized, including Best American Short Stories and The Best Nonrequired Reading. She teaches in the Graduate Writing Program at Bennington College, and at Stony Brook Southampton. She lives near New York City.

JIM SHEPARD is the author of seven previous novels, most recently The Book of Aron (winner of the 2016 PEN New England Award, the Sophie Brody medal for achievement in Jewish literature, the Ribalow Prize for Jewish literature, the Clark Fiction Prize, and a finalist for the National Jewish Book Award) and five story collections, including Like You'd Understand, Anyway, which was a finalist for the National Book Award and won The Story Prize. His short fiction has appeared in, among other magazines, The New Yorker, Harper's Magazine, McSweeney's, The Paris Review, The Atlantic, Esquire, Tin House, Granta, Zoetrope, Electric Literature, and Vice, and has often been selected for The Best American Short Stories and The PEN/O. Henry Prize Stories. He lives in Williamstown, Massachusetts, with his wife, three children, and three beagles, and he teaches at Williams College.

W. TODD KANEKO is from Seattle, Washington. He is the author of the poetry books THIS IS HOW THE BONE SINGS (Black Lawrence Press, 2020) and The Dead Wrestler Elegies (New Michigan Press, 2020), and co-author of Poetry: A Writer's Guide and Anthology (Bloomsbury Academic, 2018). A Kundiman fellow, he teaches creative writing at Grand Valley State University and lives with his family in Grand Rapids, Michigan.

Sing to It: Stories (Paperback)

This Is How the Bone Sings (Paperback)