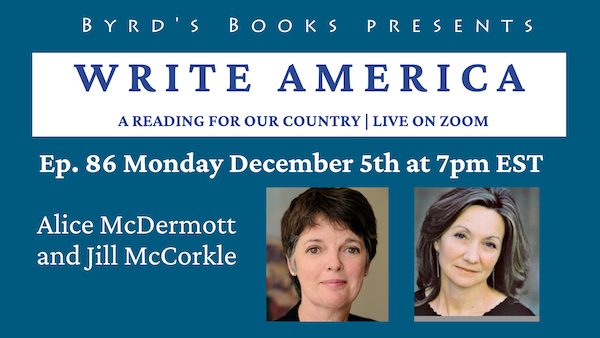 Join us for the eighty-sixth episode of Write America on Monday December 5th featuring Alice McDermott and Jill McCorkle as they read and discuss their works- intimating how the deep divisions in the country may be healed by the quiet power of art.

ALICE MCDERMOTT is the author of several novels, including The Ninth Hour; Someone; After This; Child of My Heart; Charming Billy, winner of the 1998 National Book Award; and At Weddings and Wakes. That Night, At Weddings and Wakes, and After This were all finalists for the Pulitzer Prize. Her stories and essays have appeared in The New York Times, The Washington Post, The New Yorker, Harper's Magazine, and elsewhere. For more than two decades she was the Richard A. Macksey Professor of the Humanities at Johns Hopkins University and a member of the faculty at the Sewanee Writers Conference.

Her essay collection, What About the Baby? Some Thoughts on the Art of Fiction was published in August of this year. Her forthcoming novel, A Bigamist's Daughter will be released in February of 2023.

JILL MCCORKLE One of the first authors ever published by Algonquin, Jill McCorkle's first two novels were released simultaneously when she was in her early 20s. Since then, she has published six novels and four collections of short stories. Five of her books have been NYT Notable books and Life After Life was a NYT bestseller. She has received the John Dos Passos Prize for Excellence in Literature and the North Carolina Award for Literature. Her stories have been included in Best American Short Stories and the Norton Anthology of Short Fiction. Her most recent novel, Hieroglyphics also published by Algonquin was released in 2020.

What About the Baby?: Some Thoughts on the Art of Fiction (Paperback)

A Bigamist's Daughter: A Novel (Paperback)