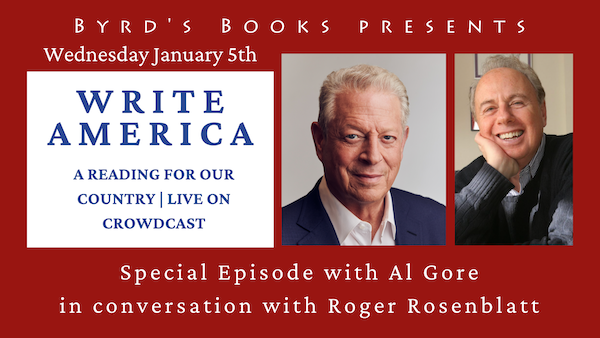 Please join us for a very special evening as we welcome former Vice President Al Gore to Write America. He will be joined by the creator of Write America, Roger Rosenblatt, as they discuss how to make better our troubled world.

Write America is a new author series created by writer Roger Rosenblatt, featuring award-winning, nationally-renowned authors, and new and emerging writers, in readings and conversation each week about how books and art might bridge the deep divisions in our nation.

REGISTRATION on Crowdcast is required for this event.

Former Vice President Al Gore is a founding partner and chairman of Generation Investment Management, and the founder and chairman of The Climate Reality Project, a nonprofit devoted to solving the climate crisis. He is also a senior partner at Kleiner Perkins Caufield & Byers and a member of Apple Inc.’s board of directors.

He is the subject of the documentary movie “An Inconvenient Truth,” which won two Oscars in 2006 -- and a second documentary in 2017, “An Inconvenient Sequel: Truth to Power.” In 2007, Gore was awarded the Nobel Peace Prize, along with the Intergovernmental Panel on Climate Change, for “informing the world of the dangers posed by climate change.”

ROGER ROSENBLATT whose work has been published in 14 languages, is the author of five New York Times  Notable Books of the Year, and three Times  bestsellers, including the memoirs Kayak  Morning, The Boy Detective and Making Toast, originally an essay in the New Yorker. The Story I Am, a collection on writing and the writing life was published in April of 2020 and Cold Moon: On Life, Love, and Responsibility was published in October.  He has also written seven off-Broadway plays, notably the one-person Free Speech in America , that he performed at the American Place Theater, named one of the Times’s  “Ten Best Plays of 1991.” In 2019, The Bay Street Theater in Sag Harbor produced "Lives in the Basement, Does Nothing," his one-person musical play about the writing life, for which he played jazz piano.
The Distinguished Professor of English and Writing at Stony Brook, he formerly held the Briggs-Copeland appointment in creative writing at Harvard, where he earned his Ph.D. In 1985, he was on the short list for NASA’s Journalist in Space, before the Challenger shuttle tragedy ended the program. Among his honors are two George Polk Awards; the Peabody, and the Emmy, for his essays at Time magazine and on PBS; a Fulbright  to Ireland, where he played on the Irish International Basketball Team; seven honorary doctorates; the Kenyon Review Award for Lifetime Literary Achievement; and the President’s Medal from the Chautauqua Institution for his body of work.
Recently, he was honored by the Fulbright Association on its 75th anniversary. In 2021, he created Write America, a weekly national reading series, to foster the healing of political and racial divisions in the country.

An Inconvenient Sequel: Truth to Power: Your Action Handbook to Learn the Science, Find Your Voice, and Help Solve the Climate Crisis (Paperback)

The Assault on Reason: Our Information Ecosystem, from the Age of Print to the Age of Trump, 2017 Edition (Paperback)

The Story I Am: Mad about the Writing Life (Hardcover)