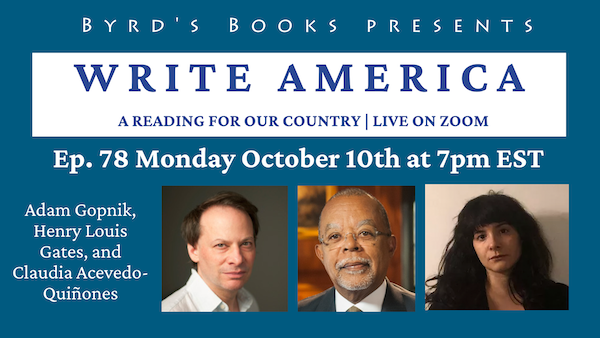 Join us for the seventy- eighth episode of Write America on Monday October 10th featuring Adam Gopnik, Henry Louis Gates, and Claudia Acevedo-Quiñones as they read and discuss their works- intimating how the deep divisions in the country may be healed by the quiet power of art.

This event is free to attend.

ADAM GOPNIK has been writing for The New Yorker since 1986. He is a three-time winner of the National Magazine Award for Essays and for Criticism and of the George Polk Award for Magazine Reporting. In March 2013, Gopnik was awarded the medal of Chevalier de l’Ordre des Arts et des Lettres by the French Republic. He lives in New York City with his wife and their two children.

HENRY LOUIS GATES, JR., is the Alphonse Fletcher University Professor and Director of the Hutchins Center for African and African American Research at Harvard University. An award-winning filmmaker, literary scholar, journalist, cultural critic, and institution builder, Professor Gates has authored or coauthored more than twenty books and created more than twenty documentary films, including his groundbreaking genealogy series Finding Your Roots. His six-part PBS documentary, The African Americans: Many Rivers to Cross, earned an Emmy Award, a Peabody Award, and an NAACP Image Award. This series and his PBS documentary series Reconstruction: America after the Civil War were both honored with the Alfred I. duPont-Columbia University Award. His most recent PBS documentary is The Black Church.

CLAUDIA ACEVEDO-QUIÑONES is a writer from Puerto Rico. Her work focuses on questions of origin, etymology, dreams, and diaspora. Her first book, The Hurricane Book, will be published by Rose Metal Press in 2023. Framed by six hurricanes that have passed through Puerto Rico in the last century, it uses news clips, poems, songs, historical bullet points, and autobiographical vignettes to look at the ways the colonial relationship between P.R. and the U.S. has informed recovery, both economic and personal, on the island and in exile.

Her poems and short fiction have appeared in The Brooklyn Rail, wildness, Ambit Magazine, Radar Poetry, and other publications. In 2019, she was a finalist for the Phillip Booth Poetry Prize, judged by Mary Ruefle. She was also the runner-up for Split/Lip Press's 2020 Hybrid Chapbook Contest. Claudia lives in Brooklyn, NY.