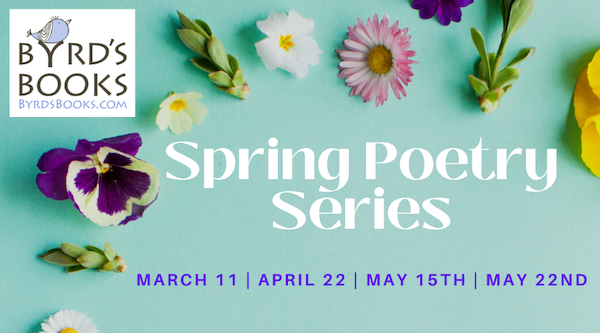 WE ARE AT CAPACITY IN THE STORE FOR FRIDAY'S POETRY NIGHT. If you would like to join us via zoom, here is the link:

Join us for night two of our three-part Spring Poetry series. April 22nd, Earth Day at 7:00pm. Live poetry- there is nothing better than hearing poetry read by the person who wrote it! Each of these poets is from CT and have so much to share with us.

Please see the author's books below and consider supporting this series with the purchase of a book. Books will be available in the store the night of the event, as well.

We are also hosting Sunday May15th and May 22nd afternoon events, which will be live at the store.

We welome Rick Magee, our newly minted Poet Laureate at each of these events. Welcome Rick!

The poets we have signed up are:

Laurel Peterson: Laurel S. Peterson is a Professor of English at Norwalk Community College. Her poetry has been published in many small literary journals. She has two poetry chapbooks: That’s the Way the Music Sounds, from Finishing Line Press (2009) and Talking to the Mirror from The Last Automat Press (2010). She also co-edited a collection of essays on women’s justice titled (Re)Interpretations: The Shapes of Justice in Women’s Experience (2009). Her mystery novel, Shadow Notes, was released by Barking Rain Press (May 2016). A full length collection of poetry, Do You Expect Your Art to Answer You? was released by Futurecycle Press in 2017. She served as poet laureate of Norwalk, CT from April 2016 – April 2019.

One eighth grade afternoon, the bully on the bus was worse than usual. I came home and wrote a story of revenge in my journal. What satisfaction to leave her bleeding (on paper, of course!) on the playground. Thus was born my career as a mystery writer. In college, I majored in psychology, fascinated by what motivates us (or doesn’t). Why did that girl down the hall only write notes to her mother and rarely talk to her? Why did one kid in a family act like a goody two-shoes, while an older brother or sister did drugs and flunked out? Why was the rich girl with all the family connections bulimic? Why did people attend a religious school only to flout all its rules? After college, I tested the waters in advertising, catering, retail, and sales, salting away character details in my journals, and in lousy short stories. Then, I did an MFA and entered the world of academic politics, where I currently reside, writing poetry and mysteries, and grading papers.

Van Hartman: Van Hartmann teaches literature and film studies at Manhattanville College in Purchase, New York. He received an A.B. in History from Stanford University and a Ph.D. in English from the University of North Carolina. His poetry has appeared in numerous journals. His first book of poems, Shiva Dancing (Texture Press), was published in 2007, followed by a chapbook, Between What Is and What Is Not (The Last Automat Press, 2010). He lives in Norwalk, Connecticut, and Peru, Vermont, with his wife, fellow writer and English professor Laurel Peterson.

Her poems are widely published in literary journals and anthologies, including:

Catherine D'Andrea taught French for ten years, raised two children, and confronted cancer before facing her fear—and dream—of being a writer.  In 2019, she graduated with high distinction from the MFA program in Creative and Professional Writing at Western Connecticut State University. She is an active member of the Sherman Writers and the Connecticut Poetry Society and her work has appeared, or will appear, in Literary Mama, the Planet Photo 50 Women Over 50 magazine, Blue Heron Review, Love-Art-Play, New Verse News, Poor Yorick Journal, and other publications. Catherine and her husband Carl live in the northwest hills of Connecticut with two entertaining cats.

Suzanne Frischkorn is the author of Fixed Star forthcoming from JackLeg Press, (September 2022) as well as the books, Girl on a Bridge, and Lit Windowpane, and the chapbooks American Flamingo, Spring Tide, Red Paper Flower, Exhale, and The Tactile Sense

She is the recipient of The Writer’s Center Emerging Writers Fellowship for her book Lit Windowpane, the Aldrich Poetry Award for her chapbook Spring Tide, selected by Mary Oliver, and an Individual Artist Fellowship from the Connecticut Commission on Culture & Tourism.

She is an Editor at $ – Poetry Is Currency and serves on the Terrain.org Editorial Board. She has also served as assistant editor for Anti-, associate editor for Samsära Quarterly; and guest editor for The Melic Review and LOCUSPOINT: New Haven.

Rick Magee, grew up in California, and he started writing poetry when he was 9. He continued to write through college at the University of California at Berkeley, where he got a degree in English and studied poetry writing with Gary Soto. Later, while getting an MA in English at Cal Poly, he worked with the poet Kevin Clark. He moved to New York to complete his studies in English, and his poetry writing had to take a back seat to academic writing. After completing his PhD, he began teaching at Sacred Heart University in Fairfield, CT. He teaches courses in literature, poetry writing, and food writing. He has returned to writing poetry, and his work can be found in The Madrigal, The American Journal of Poetry, Rough Diamond Poetry, and New Note Poetry. He is the current Poet Laureate of Bethel, and he lives there with his wife Rebecca, who is also an English professor, and his son Cormac, who wants to be an author when he grows up.