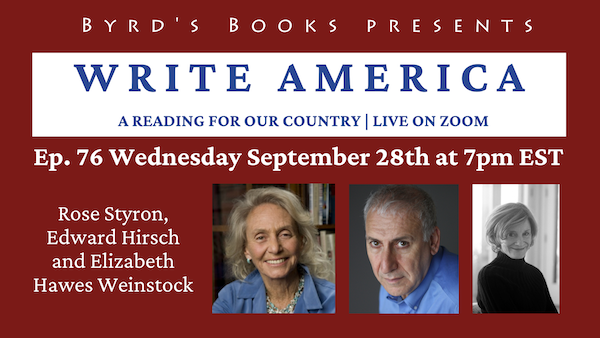 Join us for the seventy-sixth episode of Write America on a special night Wednesday September 28th featuring Rose Styron, Edward Hirsch and Elizabeth Hawes Weinstock as they read and discuss their works- intimating how the deep divisions in the country may be healed by the quiet power of art.

This event is free to attend.

Rose Styron is the author of four poetry collections: Fierce Day (Friesen Press, 2015), By Vineyard Light (Rizzoli, 1995), Thieves' Afternoons (Viking, 1973), and From Summer to Summer (Viking, 1965). She has written introductions to Letters to My Father (Lousiana State University Press, 2009), a collection of letters written by her husband, the Pulitzer Prize-winning writer William Styron, to his father, and The Selected Letters of William Styron (Random House, 2012), which she edited. Her latest book, Beyond This Harbor: Adventurous Tales of Heart and Home, will be released in April 2023 by Knoph. Also a human rights activist, Styron has traveled widely for Amnesty International and other human rights organizations. She lives on Martha's Vineyard in Massachusetts.

Edward Hirsch, a MacArthur Fellow, has published ten books of poems, most recently Gabriel: A Poem (2014) and Stranger by Night (2020). He has also published six books of prose about poetry, including 100 Poems to Break Your Heart (2021) and The Heart of American Poetry (2022). He is president of the John Simon Guggenheim Memorial Foundation.

Betsy Hawes Weinstock is an American writer of biography, journalism, and creative nonfiction. Her first book New York New York: How the Apartment House Transformed the Life of the City (Knopf, 1993) was nominated for a Pulitzer and named a New York Times Book of the Year. Her biography-memoir Camus, A Romance (Grove Press, 2009) chronicles the life of Nobel Prize-winning French-Algerian writer Albert Camus, along with her own experience trying to follow in his footsteps. It was the subject of both a Center for Fiction event and a joint PEN/Center for Transformative Lives event at New York University.

To join us ifor this episode, please use:

Beyond This Harbor: Adventurous Tales of the Heart (Hardcover)

100 Poems To Break Your Heart (Hardcover)

The Heart of American Poetry (Hardcover)