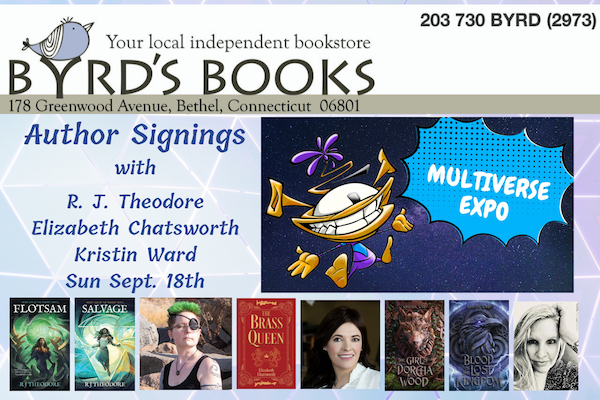 Byrd's Books will be in on the celebration at the Bethel Public Library when we host authors at the store for the Multiverse Expo!
The author signings on September 18th will begin at 1:00pm with R. J. Theodore, Elizabeth Chatsworth and Kristin Ward signing their books and available to discuss how they wrote them with you!

Her love of SFF storytelling developed through grabbing for anything-and-everything “unicorn” as a child, but she was subverted by tales of distant solar systems when her brother introduced her to Star Trek: The Next Generation at age seven. A few years later, Sailor Moon taught her stories can have both.

Her short fiction has appeared in MetaStellar and Fireside Magazines as well as the Glitter + Ashes and Unfettered Hexes anthologies from Neon Hemlock Press.

She lives in New England, haunted by her childhood cat. Find more information at rjtheodore.com.

Elizabeth Chatsworth: A native of Sheffield in Yorkshire, England, she now lives in the US where she works as a voice actor. Elizabeth writes science fiction and fantasy that celebrates rogues, rebels, and renegades across time and space. From Victorian sensibilities to interstellar travel, she'll send you on a cosmic adventure filled with quirky characters and a touch of humor!

Her debut novel, The Brass Queen (2021) has won numerous awards including the IBPA Benjamin Franklin Award™ Gold for Science Fiction & Fantasy. She is also a Writers Of The Future contest winner for her short story, "The Widow's Might."

Kristin Ward is an award-winning young adult author living in Connecticut. A science and math teacher for over twenty years, she infuses her geeky passions into stories that meld realism and fantasy. Kristin embraces her inner nerd regularly, often quoting 80s movies while expecting those around her to chime in with appropriate rejoinders. As a nature freak, she can be found wandering the woods or chilling in her yard with all manner of furry and feathered friends.

She is often referred to as a unicorn by colleagues who remain in awe of her ability to create or find various and sundry things in mere moments. In reality, the horn was removed years ago, leaving only a mild imprint that can be seen if she tilts her head just right. A lifelong lover of books and writing, she dreamed of becoming an author for thirty years before publishing her award-winning debut in 2018. Her first novel, After the Green Withered, is one of many things you should probably read.

Flotsam: Book One of the Peridot Shift, Second Ed. (Paperback)

The Girl of Dorcha Wood (Paperback)

Blood of the Lost Kingdom (Paperback)

A Storm of Wrath & Ruin (Paperback)