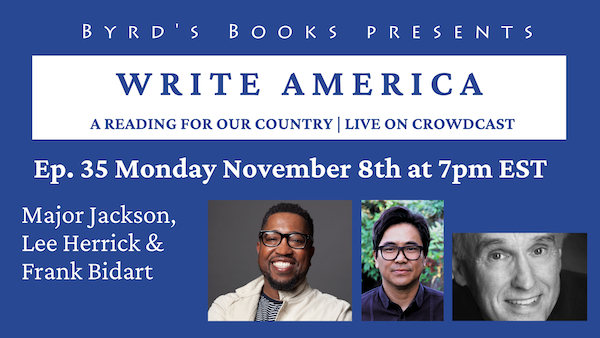 Join us for the thirty-fifth episode of Write America featuring Major Jackson, Lee Herrick and Frank Bidart as they read and discuss their works intimating how the deep divisions in the country may be healed by the quiet power of art.

MAJOR JACKSON is the author of five books of poetry, including The Absurd Man (2020), Roll Deep (2015), Holding Company (2010), Hoops (2006) and Leaving Saturn (2002), which won the Cave Canem Poetry Prize for a first book of poems. His edited volumes include: Best American Poetry 2019, Renga for Obama, and Library of America’s Countee Cullen: Collected Poems. A recipient of fellowships from the Fine Arts Work Center in Provincetown, Guggenheim Foundation, National Endowment for the Arts, and the Radcliffe Institute for Advanced Study at Harvard University, Major Jackson has been awarded a Pushcart Prize, a Whiting Writers’ Award, and has been honored by the Pew Fellowship in the Arts and the Witter Bynner Foundation in conjunction with the Library of Congress. He has published poems and essays in American Poetry Review, The New Yorker, Orion Magazine, Paris Review, Ploughshares, Poetry, Poetry London, and Zyzzva. Major Jackson lives in Nashville, Tennessee where he is the Gertrude Conaway Vanderbilt Chair in the Humanities at Vanderbilt University. He serves as the Poetry Editor of The Harvard Review.

Born in Daejeon, South Korea and adopted at 10 months old, Lee Herrick grew up in California. He is the author of the poetry collections Scar and Flower (2018), Gardening Secrets of the Dead (2012), and This Many Miles from Desire (2007). His poems have appeared in many literary magazines and anthologies, including The Bloomsbury Review, ZYZZYVA, Highway 99: A Literary Journey Through California’s Great Central Valley (2nd edition), One for the Money: The Sentence as Poetic Form, and Indivisible: Poems of Social Justice, among others.

Poet Brian Turner writes that Herrick’s poetry is “Whitman revised ... with a voice that is politically engaged and rooted in compassion. Gardening Secrets of the Dead is a wise, gorgeous book.”

He is coeditor, with Leah Silvieus, of The World I Leave You: Asian American Poets on Faith and Spirit (2020).

From 2015 to 2017, Herrick served as poet laureate of Fresno, California. Herrick lives in Fresno and teaches at Fresno City College and in the low-residency MFA Program at Sierra Nevada College.

FRANK BIDART is an American academic and poet, and a winner of the Pulitzer Prize for Poetry.

Bidart is a native of California and considered a career in acting or directing when he was young. In 1957, he began to study at the University of California at Riverside, where he was introduced to writers such as T.S. Eliot and Ezra Pound and started to look at poetry as a career path. He then went on to Harvard, where he was a student and friend of Robert Lowell and Elizabeth Bishop. He began studying with Lowell and Reuben Brower in 1962.

He has been an English professor at Wellesley College since 1972, and has taught at nearby Brandeis University. He lives in Cambridge, Massachusetts, and he is gay. In his early work, he was noted for his dramatic monologue poems like Ellen West, which Bidart wrote from the point of view of a woman with an eating disorder, and Herbert White, which he wrote from the point of view of a psychopath. He has also written openly about his family in the style of confessional poetry.

He co-edited the Collected Poems of Robert Lowell which was published in 2003 after years of working on the book’s voluminous footnotes with his co-editor David Gewanter.