Join us for a very special event on December 1st: A Conversation with Academy Award-winning lyricist, Alan Bergman. Roger Rosenblatt, the founder of Write America, will discuss the music and career with his very good friend, Alan Bergman. This is a free event, registration is required.

It is difficult to separate the career of Mr. Bergman from that of his wife Marilyn, his partner in their lyric and songwriting team, so I will not: 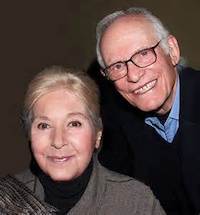 ALAN AND MARILYN BERGMAN: Two of the world’s most distinguished lyricists, Alan and Marilyn Bergman, have been contributing to the Great American Songbook for more than five decades.

They were the first songwriters to be nominated for three Academy Awards for Best Song out of the five nominated songs, 1983 brought them nominations for  “How Do You Keep the Music Playing?” from “Best Friends;”  “It Might Be You”  from “Tootsie;” and  “If We Were In Love”  from “Yes, Giorgio.”  In 1984, they again received three nominations: for the score for “Yentl” (for which they were awarded the Oscar) and two for the songs, “The Way He Makes Me Feel” and “Papa, Can You Hear Me?”  In 1995, they wrote the Golden Globe, Academy Award and Grammy nominated song “Moonlight” performed by Sting in the Sydney Pollack film, “Sabrina.”  Among their principal collaborators are Michel Legrand, Marvin Hamlisch, Dave Grusin, Cy Coleman, Henry Mancini, Johnny Mandel, John Williams, Quincy Jones, and James Newton Howard.

More on the life of this remarkable team

ROGER ROSENBLATT whose work has been published in 14 languages, is the author of five New York Times  Notable Books of the Year, and three Times  bestsellers, including the memoirs Kayak  Morning , The Boy Detective and Making Toast , originally an essay in the New Yorker .The Story I Am, a collection on writing and the writing life was published in April of 2020 and Cold Moon : On Life, Love, and Responsibility was published in October.  He has also written seven off-Broadway plays, notably the one-person Free Speech in America, that he performed at the American Place Theater, named one of the Times’s  “Ten Best Plays of 1991.” In 2019, The Bay Street Theater in Sag Harbor produced "Lives in the Basement, Does Nothing," his one-person musical play about the writing life, for which he played jazz piano .

The Distinguished Professor of English and Writing at Stony Brook, he formerly held the Briggs-Copeland appointment in creative writing at Harvard, where he earned his Ph.D. Among his honors are two George Polk Awards; the Peabody, and the Emmy, for his essays at Time magazine and on PBS; a Fulbright to Ireland, where he played on the Irish International Basketball Team; seven honorary doctorates; the Kenyon Review Award for Lifetime Literary Achievement; and the President’s Medal from the Chautauqua Institution for his body of work.

The Story I Am: Mad about the Writing Life (Paperback)