In Search of Amrit Kaur: A Lost Princess and Her Vanished World (Compact Disc) 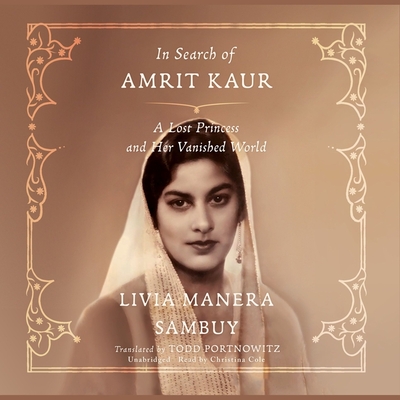 As she builds her own life anew, an Italian writer embarks on an all-consuming search for the true story of the mysterious princess H. H. Amrit Kaur of Mandi.

On a sweltering day in 2007, having just lost her brother to illness, Livia Manera Sambuy finds herself at a museum in Mumbai, enthralled by a 1924 photograph of a stunningly elegant Indian princess. What she reads in the picture's caption will change her life forever. This alluring Punjabi royal had supposedly sold her jewels in occupied Paris to save Jewish lives, only to be arrested by the Gestapo and sent to a concentration camp, where she died within a year.

Could it be true? And if so, how could such a sensational story have gone unreported? Almost against her will, Manera becomes drawn into the mystery. Delving into the history of the British Raj, its durbars and society balls and jubilees, she shows us the precipitous decline of India's royal caste. The lives of extraordinary figures such as the Maharaja Jagatjit Singh of Kapurthala, the Jewish banker Albert Kahn, and the Russian explorer Nicholas Roerich―all in a decades-long pursuit of the elusive Amrit Kaur.

When she rendezvouses with the princess's eighty-year-old daughter, Sambuy's search takes on a new dimension, as she strives to reconnect an orphan with the mother who abandoned her in 1933, leaving behind her two children, her raja husband, and a legacy of activism in India's women's civil rights movement.

In Search of Amrit Kaur is an engrossing detective story, a kaleidoscopic history lesson, and a moving portrait of women, across the century, seeking personal freedom.