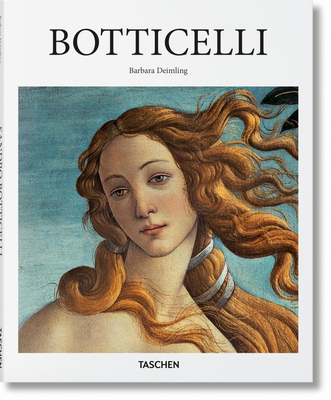 With the patronage of the powerful Medici family, a canon of secular and religious work, and contributions to the celebrated Sistine Chapel, Sandro Botticelli (1444/45-1510) was well placed for fame. After his death, however, his work was eclipsed for some four hundred years. It wasn't until the 19th century that the painter began to gain major art-historical recognition.

Today, Botticelli is hailed as a towering figure of the Florentine Early Renaissance. His secular works The Birth of Venus and Primavera, mostly read as an allegory of Spring, are among the most recognized paintings in the world, resplendent in their delicate details, graceful lines, and compositional balance. His arrangements are fluid yet poised, his figures serene yet sensual. Venus, in particular, is held up as art-historical icon of beauty: pale-skinned, delicately featured, soft with fecund promise.

This essential introduction presents key works from Botticelli's oeuvre to understand the making of a Renaissance legend. Through the painter's most famous mythological and allegorical scenes, as well as his radiant religious works, we explore a mastery of figuration, movement, and line, which has gone on to inspire artists from Edgar Degas to Andy Warhol, Ren Magritte to Cindy Sherman.

Barbara Deimling started working at the Syracuse University in Florence in 1997 and was its director from 2000; in this capacity she was responsible for all matters relating to the Florence Center. She has published books about Italian Renaissance painting. Barbara Deimling lives and works in Florence.