Reversing the Gaze: What if the Other Were You? (Other Voices of Italy) (Paperback) 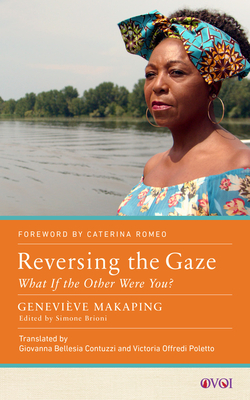 What if the Other were you? What if we were the Other? Being part of an environment is second nature to many of us. For Others, it is not. Others are perceived as not belonging to by virtue of their language, appearance, skin color, way of dressing, gesticulating, and speaking.

In this book, Geneviève Makaping denounces the structural racism of contemporary Italy, emphasizing the way in which diverse forms of inequality–race, color, gender, class–intersect and feed off each other. Drawing on her own experiences, Geneviève Makaping spins the customary gaze of anthropology around, and the gaze that in colonial ethnography was directed at the so-called uncivilized indigenous and Black peoples, now focuses on the white majority as seen from her point of view. She–a Black Italian woman, whom the white gaze often sees as the Other–has chosen the path of participant observation in order to study the white majority: “I gaze at myself who gazes at them who have always gazed at me.” This reversal of perspective forces white people, who are used to being characterized by “normality” rather than by “whiteness,” to experience what it is like to constantly be “the Other”.

Geneviève Makaping’s book–challenging, original, incisive–stimulates reflection. It forces readers, not just in Italy but all over our increasingly globalized world, to become aware of and to confront the question of racism through the retelling of everyday occurrences that we might have experienced as victims, perpetrators, or witnesses. But above all it urges us–all of us–to decide what side “we” are on and what community “we” belong to. It ultimately poses the fundamental question of who “we” are.

Geneviève Makaping is Adjunct Professor in French Language & Culture at the University of Mantova, Italy, and has also taught English at the high school level since 2013. Makaping was born in Cameroon and has lived in Italy since 1982. The subject of the 2022 documentary Maka, she was also the first Black editor of an Italian daily newspaper, La Provincia cosentina, and of a television channel, Metrosat.

Victoria Offredi Poletto (Senior Lecturer Emerita) and Giovanna Bellesia Contuzzi (Professor and Chair) have taught and collaborated together in the Department of Italian Studies at Smith College since 1990. They are committed to bringing the voices of migrant and second-generation women writers to the English-speaking world. Their many translations include Adrian Bravi’s My Language is a Jealous Lover, Gabriella Ghermandi’s Queen of Flowers and Pearls, and Cristina Ali Farah’s Little Mother.

Caterina Romeo is Associate Professor of Literary Criticism and Comparative Literature at the Sapienza University of Rome, Italy. She is the author of Riscrivere la nazione. La letteratura italiana postcoloniale [Rewrite the Nation: Postcolonial Italian Literature.