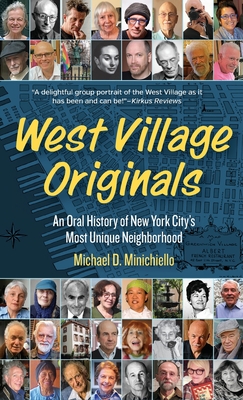 Known as "Little Bohemia" since 1916, New York City's West Village has long been a haven for intellectuals, writers, artists, and activists. Here the 19th-century homes lining the narrow cobblestone streets were broken up into apartments to house the newcomers. Gathering places like jazz clubs, piano bars, coffee shops, and book stores hummed with a sense of freedom from a more rigid society outside the neighborhood's borders. This would be the home of the groundbreaking Westbeth Artists Housing and of the Stonewall riots that gave birth to the gay rights movement.

However, by the beginning of the 21st century, the area began to witness vast changes. Desirable brownstones were transformed back into single family homes and streets once filled with antique stores and curiosity shops were becoming emblazoned with the names of top fashion designers. Michael D. Minichiello's tantalizing book captures this profound shift through ninety interviews with community activists, business owners, journalists, writers, and artists of all media. As they share their stories, we get a glimpse of both the reality and the myths that made this counterculture neighborhood the setting for both film (My Sister Eileen, Next Stop Greenwich Village) and television (Sex and the City, Friends).

Through the words of those who know it best-including Calvin Trillin, Susan Brownmiller, Charles Busch, David Del Tredici and Frederic Block-West Village Originals paints an enlivening portrait of this Oz-like neighborhood where the prevailing sentiment of its denizens is that there is no place like the West Village.