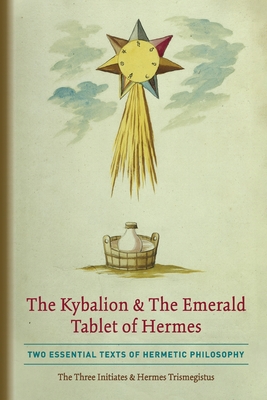 By The Three Initiates, Hermes Trismegistus
$9.14

The Kybalion & The Emerald Tablet of Hermes compose two pillars of Hermetic thought. Combined here in one volume, these two works share true wisdom with those ready to receive it. "When the ears of the student are ready to hear, then cometh the lips to fill them with wisdom."

The Kybalion was first published anonymously in 1908 by "The Three Initiates." The true authorship of the work is unknown, although theories suggest it was written entirely or in part by William Walker Atkinson.

Atkinson was a prolific writer and supported the New Thought movement of the 19th and early 20th centuries. New Thought included the belief that our realities can be manifested by mental effort, which is also suggested in Hermetic principles. Scholars point to similarities in style and content between The Kybalion and Atkinson's own The Arcane Teachings as evidence that he was one (or all) of "The Three Initiates."

The Kybalion provides an introduction to the teachings of Hermes Trismegistus--Hermes "the Thrice-Greatest." This "Master of Masters" is said in The Kybalion to have lived 300 years on Earth, and believed by some to be the founder of both astrology and alchemy (precursors to astronomy and chemistry, respectively). Hermes Trismegistus was deified after his death as Toth by the ancient Egyptians, and Hermes by the Greeks. In both pantheons, this man-turned-god was considered a symbol of great wisdom.

The Kybalion's explanation of Hermetic teachings are claimed to have been passed down orally for centuries, eventually reaching "The Three Initiates." The fundamental Hermetic traditions presented in The Kybalion consist of seven "working principles" Mentalism, Correspondence, Vibration, Polarity, Rhythm, Cause and Effect, and Gender. Within these seven principles is true wisdom, tied to no particular place and no particular religion. It is the "sacred flame" kept lit by a chosen few used to "re-light the lesser lamps of the outside world when the light of truth grew dim..." In short, these are the truths of the universe, regardless of era or creed.

The Emerald Tablet of Hermes is a short, ancient text attributed to Hermes Trismegistus himself. Unlike The Kybalion, which aims to provide some explanation and instruction, the brief Emerald Tablet has been puzzling and fascinating scholars for over 1,000 years.

Consisting of a mere 14 stanzas, the Emerald Tablet is said to contain the secrets of prima materia--the foundational material of the universe. The Emerald Tablet and its teaching influenced freemasonry and philosophy throughout history. The text of the tablet has been translated and commented on by a variety of scholars, including Sir Isaac Newton who was inspired by its teachings throughout his life and work.

The earliest known version of the text comes from an Arabic work written between the 6th and 8th centuries by Balinas. He claimed to have found the tablet hidden in a vault beneath a statue of Hermes. Another story claims the tablet was written by Seth, the third son of Adam and Eve. And yet another says the tablet was uncovered and then reburied by Alexander the Great.

The source and material of the physical tablet is unknown. It was reported to be a rectangular green stone, with text in raised bas-relief rather than engraved. Some even claim there never was a physical tablet at all, although several accounts claim it was on display in Egypt in 330 BCE. Whatever its origins and history, the work was first introduced to the West in the 12th century through Latin translations. Since then, this cryptic text has been translated and re-translated, pored-over and analyzed by philosophers, historians, and theologians alike.