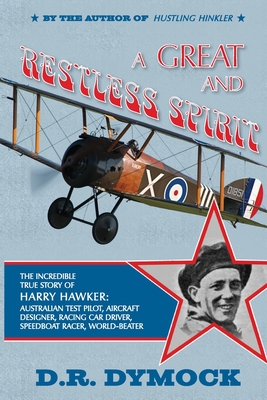 If Harry Hawker MBE AFC (1889-1921) was alive today, he'd be churning desert dust in the Dakar Rally, strapped in a rocket on a SpaceX flight, or taking pole position in Formula 1.

Victorian-born Hawker moved to England at age 22 and became an overnight aviation legend. In his day, he flew faster, higher and for longer than anyone else in Britain. His one need was speed.

When he wasn't racing planes, cars and speedboats, Hawker was helping design and test WWI fighting aircraft. His boss, aviation trailblazer Tommy Sopwith, thought he was a genius.

Behind him stood a remarkable Englishwoman who kept his feet on the ground. But the mother of two grew increasingly anxious as her go-getting husband continually pushed the boundaries.

Especially when he disappeared attempting the first transatlantic flight ...

And bubbling away was an underlying weakness that would literally help bring Harry Hawker down. Forever. He was just 32.