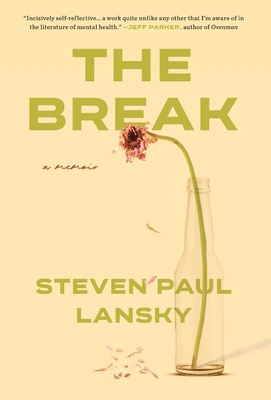 First diagnosed with schizophrenia following his freshman year at Harvard, Steve Lansky learned over the years to manage his mental illness with the help of medication. By middle age, he had forged a life as a poet and teacher. But like so many similarly afflicted, he felt heavy and hamstrung by the drug that had helped keep him sane. When a new drug came on the market, Lansky switched to it, hoping to regain the energy and lightness of his youth. It worked. He was able to pursue a romance with a young aspiring actress. He started riding his bike again-a lifelong passion. But his renewed energy also led him in directions less healthy and tethered to reality.

As The Break begins, Steve is embarking, despite admonitions from academic colleagues, on an ill-considered and quixotic train trip from his Cincinnati hometown to The New Yorker Festival, where he believes he will be able to persuade someone at the magazine to publish one of his poems. In a voice that is at times comic, at other times harrowing, Lansky describes his increasing disorientation, which culminates, after he gets on the wrong train home, with a late-night arrest in a trainyard and a stint in a New Jersey state mental hospital. Following his release, he embarks on another poorly conceived journey, this time an unwelcome visit to his brother in Vermont with whom he shares a plan to see author Margaret Atwood so she and Steve can discuss her novel Alias Grace. With a hero who is part Bukowski, part Neal Cassady, part Humbert Humbert, The Break shows how tenuous sanity is, and how easy it is for inspiration to give way to madness.