Unique as a Snowflake (Paperback) 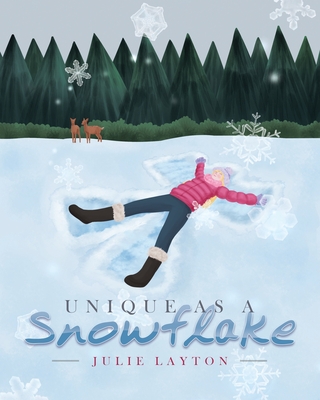 Josie was feeling discouraged and sad as she glanced at the image of herself in the mirror. She didn't like anything about herself. She didn't like her blonde hair and thought it looked like yellow straw. She hated her long skinny legs because they made her too tall; she was the tallest girl in her class.

Josie remembered just yesterday a boy in her class, Trevor teased her, saying she had a long neck and looked like a giraffe. She wished she could be like her friend Claire who had pretty, curly black hair. Josie always wanted brown hair so she could be just like her mom and dad; even her brother had brown hair. Why did she have to look so different?

Josie heard her mother calling her and telling her to come downstairs for dinner. As Josie headed over to go down the stairs, she almost reached the bottom when suddenly, she lost control and went stumbling down all the way to the floor. Somehow, she had missed those last two steps again She landed right on her bottom. As she sat up brushing the hair out of her eyes, Mother heard the crash and came running in to see what happened. As Mother was helping Josie to her feet, Josie began to cry. She blurted out that she hates her long legs and big feet and why is she always so clumsy?

Unique as a Snowflake was written because children in this world don't know how valuable they are. This is a mother's story about recognizing and comparing her daughter's individualism to the undeniable and beautiful things in nature. Her mother tells Josie how God loves her and made her special because of her uniqueness.