River of Darkness: Francisco Orellana and the Deadly First Voyage Through the Amazon (Paperback) 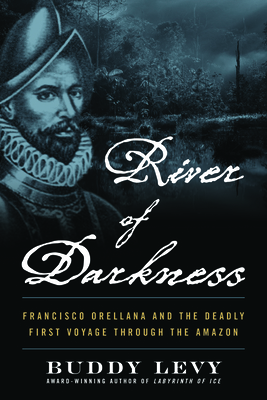 The acclaimed author of Conquistador and Labyrinth of Ice charts one of history's greatest expeditions, a legendary 16th-century adventurer's death-defying navigation of the Amazon River.

In 1541, Spanish conquistador Gonzalo Pizarro and his lieutenant Francisco Orellana searched for La Canela, South America's rumored Land of Cinnamon, and the fabled El Dorado, "the golden man." Quickly, the enormous expedition of mercenaries, enslaved natives, horses, and hunting dogs were decimated through disease, starvation, and attacks in the jungle. Hopelessly lost in the swampy labyrinth, Pizarro and Orellana made the fateful decision to separate. While Pizarro eventually returned home in rags, Orellana and fifty-seven men continued into the unknown reaches of the mighty Amazon jungle and river. Theirs would be the greater glory.

Interweaving historical accounts with newly uncovered details, Levy reconstructs Orellana's journey as the first European to navigate the world's largest river. Every twist and turn of the powerful Amazon holds new wonders and the risk of death.

Levy gives a long-overdue account of the Amazon's people--some offering sustenance and guidance, others hostile, subjecting the invaders to gauntlets of unremitting attacks and signs of terrifying rituals.

Violent and beautiful, noble and tragic, River of Darkness is riveting history and breathtaking adventure that will sweep readers on a voyage unlike any other.