Keep On!: The Story of Matthew Henson, Co-Discoverer of the North Pole (Paperback) 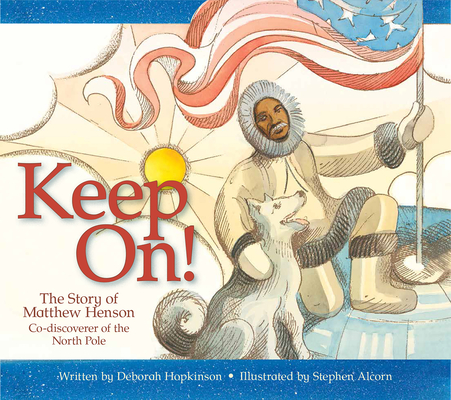 
Matthew Henson was born just after the Civil War, a time when slavery had been abolished, but few opportunities were available for Black people. As a child, Henson exhibited a yearning for adventure, embarking at age thirteen on a five-year voyage sailing the seven seas.

But Henson's greatest adventure began when Robert Peary invited him to join an expedition to the North Pole. After many storms, injuries, and unimaginable cold, on April 1, Peary, Henson, and four Inuit men began the final 133-mile push to the Pole.

Deborah Hopkinson grew up in Lowell, Massachusetts, and received a BA in English from the University of Massachusetts and an MA in Asian Studies from the University of Hawai'i at Manoa. She is the author of more than fifty books for young readers, including picture book and middle grade fiction and nonfiction. She lives in Oregon with her family and a menagerie of pets.

Stephen Alcorn was born in the United States and grew up in Italy. A professor at Virginia Commonwealth University, he is an award-winning printmaker, portraitist, and illustrator of over fifty children's books, including Let it Shine, a Coretta Scott King Honor Book. He lives in Virginia.

"Henson's story is dramatic, although the narrative voice is soft as velvet, while Stephen Alcorn's artwork appears both washed in bitter cold and defrosted by its hand-tinted quality." —Kirkus Reviews